What an exciting couple of matches in the Indian Premier League (IPL) 2009 were witnessed at the Kingsmead in Durban on May 14! Rajasthan Royals recorded a thrilling two-run victory over Mumbai Indians after Royal Challengers Bangalore had edged out Chennai Super Kings by two wickets earlier in the evening.

Nothing could be more recreational for a cricket fan than close contests that go to the wire, be it the any form of the game. Even the Twenty20 matches become boring for a while if the side batting first is bundled out cheaply or the team batting second loses far too many early wickets in pursuit of a substantial total.

But there was a spectacle in store for the lovers of the game in Durban and the millions of them watching the action live in different parts of the world. Both the matches turned out to be thrillers. In fact they could also be classified as nail-biters with the body language of the players in the middle and those in the hut reflecting the tension and anxiety.

Two of the all-time greats of the game, Sachin Tendulkar and Shane Warne, were up against each other in the Mumbai-Rajasthan game with both of them leading their respective outfits.

What a contest it turned out to be between the two! Warne knew he didn’t have many runs in the bank after his side had been restricted to 145 for seven in the allotted 20 overs. He needed early wickets to stay in the game and his bowlers responded by reducing their rivals to 23 for three.

Tendulkar, having demoted himself in the batting-order, joined master blaster Sanath Jayasuriya with their team in dire straits. Both the seasoned campaigners opted to rebuild by cutting out the risk element and their approach looked a bit unconventional for the shortest version of the game.

With the asking rate hovering around nine an over, Jayasuriya perished when he attempted to break the shackles. Tendulkar lived longer and counter-attacked with purpose to bring the target within striking distance.

Abhishek Nayar’s cameo put Mumbai in front and they looked certain to wrap up the issue with just six runs needed off the nine balls. But a sensational final over from Munaf Patel won the day for Rajasthan instead. Warne’s captaincy, besides his bowling, was spot on and Patel’s composure under pressure was truly outstanding. 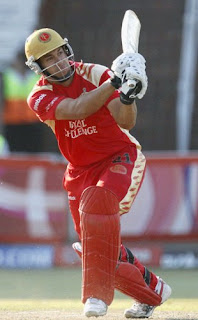 Earlier in the day Royal Bangalore Challengers had overcome some nervous moments to defeat Chennai Super Kings by two wickets with just two balls to spare. Bangalore made heavy weather of a modest target of 130, cruising home only after some good work by their lower-order batsmen.Ross Taylor and Virat Kohli revived Bangalore after a disastrous start. With the asking rate not that high, the situation was ideal for Rahul Dravid to have gone on to bat in his typically assured fashion but this was not his day.

Mahendra Singh Dhoni’s proactive captaincy kept Bangalore under pressure as they kept losing wickets at regular intervals. The match was wide open until the 19th over in which 12 runs came including of a six from Praveen Kumar.

With only five runs needed off the last over, Dhoni threw the ball to the tall New Zealander Jacob Oram who obliged the skipper by removing his compatriot Taylor on the very first ball to open up the contest once more. There could have been more drama had Laxmipatty Balaji not misfielded in the deep.