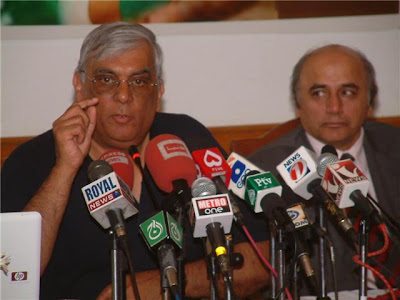 General Syed Arif Hasan, President, Pakistan Olympic Association (POA) and Chairman, Pakistan Sports Trust (PST), did not mince words in stating that the country can produce better results in the field of sports provided the athletes were provided the desired training and coaching facilities.“We have already moved a summary to the Government of Pakistan in which the plans for the restructuring of sports have been outlined. We have mentioned that funds of Rs 400 million will be needed over the next couple of years if we are to achieve the desired results in the 2010 Asian Games,” the General remarked while addressing the media at the Karachi Club on November 18.

The General, flanked by the President of the Pakistan Table Tennis Federation (PTTF), S M Sibtain, and the President of the Pakistan Billiards & Snooker Association (PBSA), Alamgir Anwar Shaikh, shared the plan with the media corps of Karachi and looked positive throughout the briefing last over an hour. Colonel Mohammad Azhar Dean, Director Finance & Administration, PST, was also present on the occasion.“We desire to have more interactive sessions with the media based in Karachi who have done great service in promoting the soft image of country and they have been proactive throughout in playing their role in bringing glories for the country,” he acknowledged.

“I have come here just to share my thoughts with you. I have been in touch with the media professionals and sports administrators of Karachi on a regular basis and today I thought we should have a session to briefly discuss the ups and downs of Pakistan sports” the POA President added.

“As you know it very well the standard of sports in Pakistan has been on the decline. It has been very tough putting the pieces together and arresting the decline. We have tried our level best to do in the limited resources that have been at our disposal. We have been lending all out support to our affiliated federations to boost their confidence. The federations have the responsibility of raising their teams and keeping them motivated,” he pointed out.

“You are well aware of the fact that Pakistan stood no chance whatsoever of bringing home any medal in the 2008 Beijing Olympic Games. It would have been a miracle had we pocketed any medal in the given scenario. Let us put the 2008 Beijing Olympic Games behind us and look to the future now. We have some breathing time and we are working overtime to avail that,” General Arif noted.

“Our athletes have come up with heartening performance in the recent events like the Commonwealth Youth Games and Asian Beach Games that prove our point that we can accomplish our mission of bringing home medals if we continue to lay emphasis on training and grooming,” the General thought.

“The Pakistan Sports Trust (PST), which is the marketing arm of the Pakistan Olympic Association (POA), has spent millions of rupees on the training of the youngsters and the results are beginning to come. We need more resources, more funds and more time to deliver,” he continued.

“We know the future lies with the investment in youth. Besides facilitating the national sports federations in letting them work professionally, we are focusing on the junior programmes to provide the youngsters the platform to unfold their talents,” the General explained.

“Our target and mission at the moment is to claim medals in the Asian Games 2010 and other regional events. This would only be possible with the support of all our stake-holders, particularly the government,” General Arif believed.General Arif was bombarded with some unrelated and illogical questions but he didn’t lose his cool or composure. He listened to the observations patiently and gave convincing answers to the queries that indeed merited attention.