Pakistan safely through, India on tenterhooks

Pakistan have accomplished their first task of securing a place in the quarter-finals with a resounding victory over Zimbabwe on March 13. The victory allows Pakistan a chance to have a go at the title. In fact they are now only three wins away from the title. 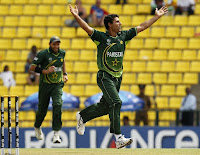 Their last league game against Australia would merely be of academic interest in the context of the tournament because both the teams have already secured their places in the knockout phase of the competition.

It’s Pakistan maiden entry beyond the first round for 12 years. They had powered their way to the final in 1999 but crashed in 2003 as well as in 2007, despite in possession of a formidable outfit on both occasions. 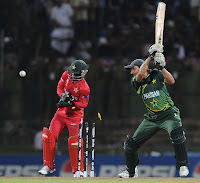 Although there’s no element of surprise in Pakistan’s advancement to the quarter-finals given the scenario in their Group but nothing could have been taken for granted after the debacle in 2007.

The Indians, on the other hand, have done enough to keep their millions of supporters on tenterhooks with their incredibly poor performance so far. They have fared more miserably than any of the minnows.

Even the teams like Canada, Kenya and the Netherlands have shown their greater will and determination to fight. Look at the way how Ireland have gone about their business with the limited resources at their disposal.

I think every team, other than India, has come up with better display than was being anticipated. The Australians have lifted their game during the World Cup. The New Zealanders have surprised their own fans with terrific showing. The West Indies haven’t looked bad either.

England have struggled to an extent but that was not unexpected after their dismal outings in the ODI series against Australia on the eve of the World Cup. They had far too many weaknesses to be considered serious contenders for the trophy.

India, at the moment, are living to the billing of compromising on their own interests. In the past as well they have annoyed many and probably obliged just a few with their below-par performance against the heaviest of odds.

The Indians have now given the much needed confidence to South Africa, who were labeled as chokers after their failures from position of strength. It was a different story altogether at Nagpur where India let them come out of the jail with the kind of self-destruction least expected from any team in a World Cup encounter.

My assessment to that game is simple. It was just not cricket. Because you cannot justify that kind of collapse and let-offs. Batting power play is no excuse. If their batters don’t desire it they should discard it from their plans altogether which should at least ensure that they last full 50 overs.

The manner in which the fancied Indian batting line-up had crashed in the final phase of the innings against England and South Africa, after being in total control, should be of some interest to the heavily paid officers of the Anti-Corruption Unit of the International Cricket Council (ICC).