Engro teams up with Quetta Gladiators for PSL


Engro Foods, one of the largest conglomerates of Pakistan, have become the official sponsors of Quetta Gladiators for the PSL-3 and the agreement in this regard was signed between the company’s President, Ghias Khan, and Nadeem Omar, the franchise owner, in a ceremony on February 8. 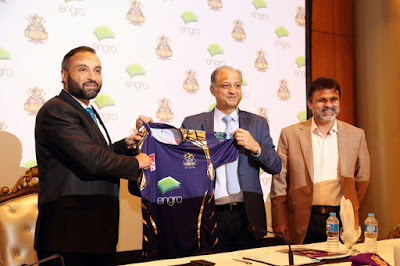 The tastefully decorated office of Quetta Gladiators, owned by Nadeem Omar’s Omar Associates (Pvt) Ltd, was buzzing with activity on a pleasant Karachi afternoon and the auditorium, the venue of the signing ceremony, was packed to capacity to witness the event.

“We are starting this partnership with very high hopes of making it a big one as we share a lot of common goals. We need the support of corporations and sponsoring partners to grow and become self-sustaining entity. Together we can achieve our mutual objective of putting Pakistan on top of the tree in the cricket world,” Nadeem Omar observed.

The Engro President, an ardent supporter of the game, described the Pakistan Super League (PSL) as a great initiative, having facilitated the return of international cricket to Pakistan. He was thrilling at teaming up with Quetta Gladiators, the only team to have reached both the PSL finals.

There was more good news for Quetta Gladiators as unlike the last edition of the Pakistan Super League (PSL), their foreign cricketers have agreed to play their matches of the upcoming PSL-3 being staged in Karachi and Lahore. 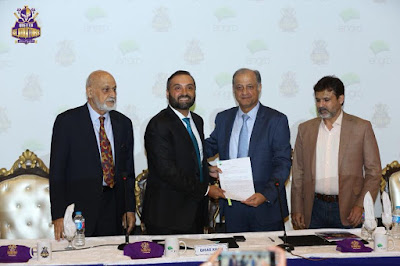 “With the sole exception of Kevin Pietersen, all the foreign players of our squad have expressed their willingness to play in Pakistan this time round. Even the flamboyant England batsman (Pietersen) may come and play in our cities,” Nadeem Omar, owner of Quetta Gladiators, revealed in his speech on the occasion.

It may be recalled that Quetta Gladiators were deprived of the services of their prolific overseas cricketers, who opted not to travel to Lahore, as the Pakistan Cricket Board (PCB) chose to move the PSL-2 final away from the United Arab Emirates (UAE) during the course of the tournament.

Having finished runners-up in both the editions of the PSL, Quetta Gladiators appear determined to make it third time lucky as the PSL-3 gets underway with the usual fanfare later this month. “We were considered underdogs on both occasions but we turned it around with passion and team spirit and proved many people wrong by cruising into the final. Sadly we couldn’t win the title in the past but I am quite confident that our team will perform better than before to bring him the trophy,” Head Coach Moin Khan, himself a former Pakistan captain, remarked.

“In cricket you cannot guarantee results but one thing is sure that we are going to fight until the end. That’s what we have been doing in the past and will keep doing it as we maintain very relaxed atmosphere in our dugout with the emphasis being on team spirit rather than anything else,” he added.

Moin Khan reckoned that the PCB should appoint Sarfraz Ahmed as the captain of the national team until team until the 2019 World Cup which will be helpful in bringing to an end speculations and uncertainties.

“Just as Quetta Gladiators have announced that Sarfraz Ahmed will continue leading our team as long as he’s fit, the PCB would be advised to go for a long-term appointment in the larger national interest,” the former Pakistan captain added.
readmore »»