Posted by Syed Khalid Mahmood at 9:26 AM .
0 comments
Labels: Pak vs Aus
By Syed Khalid Mahmood
It has been the specialty of the Pakistan teams over the years, doing things that are hard even to conceive. They have had the unusual knack of accomplishing the impossible-looking tasks. There was not much element of surprise in Pakistan winning the first One-day International against Australia by four wickets but the manner in which the latter collapsed caused the drama. 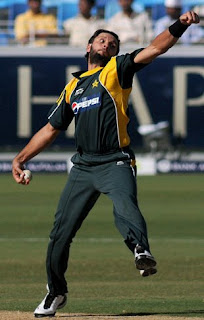 What happened at the Dubai Sports City Cricket Stadium on April 22 was truly sensational. The Australians, understood to be one of the most powerful teams on the scene, crashed like novices against the Pakistan spinners who exceeded all expectations.
How often would you expect a team like Australia, who are known and feared for taking the fight to the opposition, collapse to 122 for nine after being so happily placed at 95 for one in the 19th over.
The duo of Shahid Afridi and Saeed Ajmal was able to return the flattering figures after the Aussies, having elected to bat, had laid a solid foundation. The amazing turnaround was carried out by a couple of spinners neither of whom had the credentials or the skills to perform the giant-killing act of this magnitude.
Shahid Afridi, whose place in the playing eleven always remains in jeopardy because even the selectors and the team management are unwilling to gamble with him, returned the figures that would have made even the legendary spinners like Shane Warne and Mutiah Muralitharan proud.
Six for 38 in 10 overs are dream figures in any form of the game for any class of bowler. No doubt it was the career-best performance with the ball by the leg-spinning all-rounder. Not sure though for how long will it insure his place in the team in the future.
You certainly cannot blame the selectors or the team management for not having him in the scheme of things at all times because he prefers to play the game his own way irrespective of the demands of the situation. When the lady luck is smiling on him, he can turn into a most explosive of all-rounder but he’s equally vulnerable when he’s not deriving that divine help from the Nature.
Saeed Ajmal’s spell with the ball was no less dramatic. The young off-spinner gave away only 19 runs in his 10 overs picking up a couple of important wickets in the bargain. Together with Shahid Afridi, he tormented the Australian batsmen who looked clueless against them. 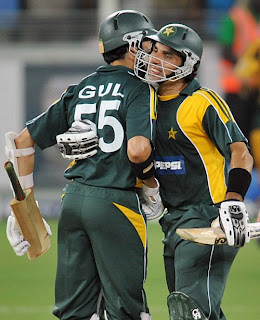 The Australians were expected to total much higher than 168 what they could manage even after the start their top-order had made in conditions not difficult for batting.
The unimaginative leadership of the stand-in captain Michael Clarke made Pakistan’s task easier when chasing the target of 169 in 50 overs. He was probably unaware of the fact that the Pakistan batsmen, having blunted the likes of Muralitharan and Ajantha Mendis a few months ago, were not going to be tested by someone like Nathan Hauritz who understandably went wicketless.
Clarke would have been much better off attacking the batsmen with fast bowlers which he did realize after having gifted some precious runs by allowing Hauritz half a dozen overs.
readmore »»