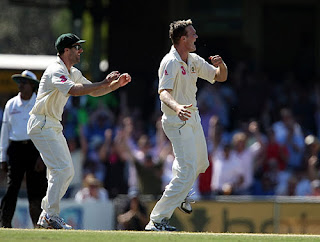 Ricky Ponting’s sporting declaration on the fourth afternoon had provided South Africa a rare opportunity of inflicting a whitewash over Australia. The kind of performance the visitors had come up with in the earlier two Tests one thought that the Australians had taken a big risk even though Graeme Smith was unlikely to bat.
Ponting’s gamble paid immediate dividends when the makeshift opener, Morne Morkel, was picked up for nothing. But the resolute batting by Neil McKenzie and Hashim Amla late on the fourth day kept the game alive and there were possibilities of all three results on the fifth day.
Obviously Australia held the advantage entering the last day but the inexperience of their bowling attack was a factor that prompted even the experts to believe that the South Africans had a realistic chance of knocking off the runs.
An exciting contest was in prospect at the Sydney Cricket Ground where Australia had pulled off a dramatic win over India in the closing stages last year. The inconsistent umpiring of Steve Bucknor and Mark Benson had helped the hosts greatly in taming the Indians but the Australians managed to down the high-flying South Africans without that kind of outside support.
Like the Sydney Test against India last year, the game went into the final session with the visitors fighting hard to save it. The injured Graeme Smith came in to bat at number eleven to bat out the remaining overs but the objective could not be achieved.


But it was a very courageous act of the South African captain to have walked to the middle despite carrying a serious injury that had forced him to retire in the first innings. Smith had a broken left-hand and his right elbow was equally sore but he occupied the crease for nearly half an hour with Makhaya Ntini.
Ntini, nor known for his batting skills, surprised many with his rearguard action. He and his new ball partner Dale Steyn, who enhanced his batting credentials with his gritty knock in the previous game, had earlier frustrated the home side for 75 minutes. 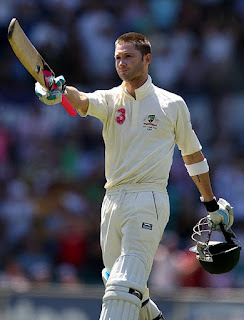 Smith and Ntini were in the process of salvaging a draw when left-arm fast bowler Mitchell Johnson went through the gate of the South African skipper with just five minutes remaining to give Australia a consolation victory. A year ago it was the part-time left-arm spin of Michael Clarke that had earned the hosts a win over India.

Smith’s ambition of saving the Test could not be fulfilled but he would be leaving Australia, prematurely due to injury, as a man highly satisfied and elated. It’s after all for the first time that South Africa have won a Test series in Australia.
Ponting, under fire for not delivering the goods, had a rare moment to celebrate in the recent times. The inexperience bowling attack at his disposal comprising of Peter Siddle, Mitchell Johnson, Doug Bollinger, Nathan Hauritz and Andrew McDonald won the game that allowed Australia to retain the number one world ranking.