Dhoni makes waves of all kinds in Goa

Reports indicate that Mahendra Singh Dhoni happens to be the most popular cricketer in the world after that man called Sachin Tendulkar. While Tendulkar has had an international career of 21 years now Dhoni is just 29-year-old not having been on the horizon for full six years even. 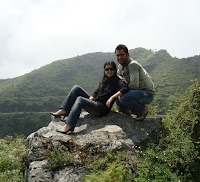 And there’s an area of the game where he has already overshadowed the Grand Master, who has numerous world records under his belt. Dhoni has proved to be an outstanding leader and his success record at all levels has simply been incredible so far.

No wonder he has been hailed as the best captain in the world at the moment, having accomplished conquests with consistency. No discredit meant to the feats of Tendulkar of late but Dhoni’s inspirational captaincy has been the key factor in the continued success of Team India.

Dhoni has been such a calming influence on a team that has the vast experience as well as the raw talent to come good in all conditions. He has been chiefly responsible for taking India to the top of the ladder in the Test rankings. The manner in which he is moving there’s very little doubt in one’s mind that his team would become the leaders in the other two formats of the game as well.

I had written the first-ever article on this blog exactly a couple of years ago captioned ‘Dhoni: The toughest not the luckiest.” He has proved me absolutely correct although it’s very difficult to the extent of next of impossible to predict about the success of any Indian in any given field with so many external factors involved.

Dhoni, I maintain, is an extraordinarily gifted soul who has perfected the art of concealing his emotions. Seldom does he react adversely in the grimmest of situations and commands complete respect from the seniors as well as the juniors.

I don’t know how many management books has he read or what else he does to enhance his own mental toughness the fact remains that he is the single greatest motivating factor behind the success of the new-look Indian team. 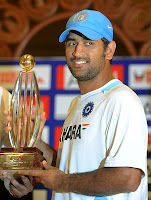 He knows better than anybody else than nothing could be taken for granted. He’s very much aware of the fact that you have to do the basics right first before thinking of further progress. He has set very high standards for himself but I get the impression that he’s not traditional hard task master who would scare any of his teammate.

Dhoni’s modesty has also had a role in ensuring the boys and elder statesmen in the side remain in peace and complete comfort under his leadership. He’s not willing to put undue pressure on any of them with everyone assigned a definite role.

The cool head of coach Garry Kirsten must have helped Dhoni considerably in extracting the best from the team in every situation. I think they represent an improved version of John Wright and Sourav Ganguly.

With the wet outfield preventing any play in the third and final One-day International against Australia on October 24, Dhoni availed the opportunity of celebrating the series win by spending time with wife Sakshi on Goa beaches.

The happy couple visited the Benolin beach where they were spotted splashing and canoodling together. It was a rare sight for the other visitors, who didn’t miss to capture the moment in their cameras and mobile phones.
readmore »»