The Sir Syed University of Engineering & Technology (SSUET) has vowed to keep the Aligarhian spirit alive by continuing the policy of promoting sports in a big way. 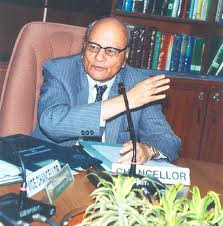 Engr Z A Nizami, Chancellor, SSUET, and President, Aligarh Muslim University Old Boys Association (AMUOBA), renewed the pledge while talking to a group of sports journalists at the University campus in Gulshan-e-Iqbal on December 10.

Ali Zafar Khan Afridi, Joint Secretary (Sports), AMUOBA, who had secured admission in the Aligarh University in the 1940s on the basis of his all-round excellence in swimming, was also present on the occasion.

“The legendary Sir Syed Ahmed Khan, who is credited to have played the pioneering role in enlightening the people of South Asia, laid great emphasis on education and sports. That’s why sports featured prominently in the list of priorities at the Aligarh University which he founded. The first-ever covered swimming pool of international standard in the entire region was built there,” Engr Nizami, who himself played tennis while studying at the famous Aligarh University, revealed.

“The SSUET, founded by the AMUOBA in 1994, has been following the principles of Sir Syed Ahmed Khan and the university has carried forward the Aligarhian spirit of sports among its students. We are delighted to be the largest university of the country in the private sector with more 5,000 students enrolled,” the SSUET Chancellor observed.

“Special consideration is given to the outstanding athletes at the time of admission where the sports certificates carry certain marks. The performance in sports also helps them in getting scholarships,” Engr Nizami, who also served as the Director General of the Karachi Development Authority (KDA), added.

“We have developed sporting facilities at the ground, owned by the Karachi Hockey Association, which is just opposite our campus. We encourage and support our students to actively take part in sports and quite a few of our teams have fared well in many competitions across the country,” he elaborated. “We have planned even bigger things for sports in future. We have decided in principle to build a sports complex in our new campus which is to be spread over 200 acres. Besides providing facilities for indoor games at the sports complex, we will also make an athletics field and a swimming pool,” he revealed.

“At present we have space constraints here. Otherwise we would have developed more facilities than we actually have at the moment. Since sports remains in the list of our priorities we will make amends by building infrastructure projects that would serve the generations to come,” he announced.

“We have passion and determination to play a lead role in motivating the students to engage in healthy activities like sports. We fully understand its importance and significance,” the SSUET Chancellor said. “Among the other initiatives to be launched in the near future are instituting ‘Athlete of the Year’ award at the SSUET,” Engr Nizami concluded.
readmore »»