Singh is King once more

The encounter between Pakistan and India in the ongoing 10th Asia Cup 2010 in Dambulla lived up to the reputation of another high voltage contest that kept the cricket enthusiasts across the border glued to their television sets until Harbhajan Singh smashed Mohammad Aamer for a huge six in the last over to settle the issue. 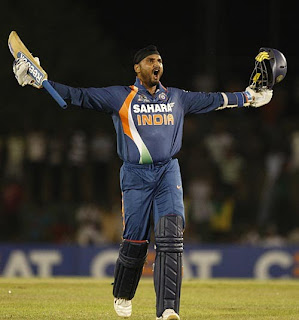 It was typical of an Indo-Pak match as India very nearly lost the plot in the closing stages after being in control of the proceedings. Only they could have been expected to lose a 50-over game even when needing just over run a ball in the last 10overs with as many as seven wickets in hand.

Pakistan, on the other hand, have had a history of coming back from the dead. They almost did it once more. Only they could have been expected to pull it back after being outplayed in the earlier phase of the game.

Pakistan’s total of 267 was unlikely to test the Indian batsmen even if they played to half of their potential. Well the Indian batting didn’t fire with Virender Sehwag looking completely out of sorts. Gautam Gambhir, however, batted with purpose and put his team in a commanding position.

With skipper Mahendra Singh Dhoni and Rohit Sharma on top of the bowling India appeared poised for a resounding win, even after the departure of Gambhir. But the equation changed dramatically in a matter of a few overs as not only the key wickets tumbled but the run rate was literally jammed.

The dismissal of Dhoni summed up the story. He was paddling a delivery that was certain to be declared a wide had he missed it. Instead the ball changed direction after finding the edge of his bat and he was clean bowled. Ravindra Jadeja is still not the batsman a team like India needs at number seven and he failed again, not unexpectedly though.

That brought two new batsmen to the crease in Suresh Raina and Harbhajan Singh. While Raina, we all know, had the capacity to take the attack to the opposition but with an asking rate of 10 for the last five overs explosion was needed from both ends. 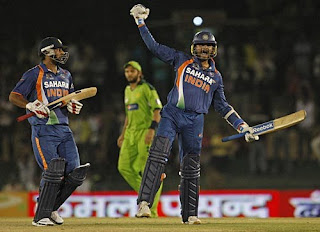 Harbhajan, who had not been allowed to bowl his full quota of overs by the Pakistan batsmen earlier in the day, made amends with heroics with the bat. He was not afraid to attack Pakistan’s express bowlers and he was able to complete the job after losing Raina in the final over.

India finally won the match by three wickets with just one ball remaining which they could have easily pocketed by seven wickets with quite a few overs in the bag. The Indians came perilously close to having thrown the match from a position of complete control yet again.

The Indians, according to Man of the Match Gambhir, were keen to settle the scores with their arch-rivals after having been floored by Pakistan in the last edition of the ICC Champions Trophy in South Africa. The objective was accomplished albeit unconvincingly in the end.
readmore »»