Great Kumble leading from the front

Watching Anil Kumble move with so much of energy around the South African grounds who would believe that he has actually retired from international cricket. He has been in great form with the ball and most significantly he has come up trumps in the shortest version of the game. 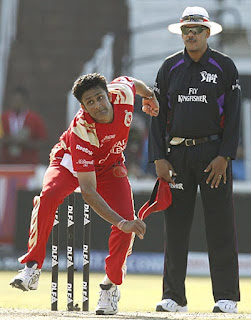 The champion leg-spinner, who is India's leading wicket-taker in Test cricket, has bowled brilliantly for Royal Challengers Bangalore and his side is on verge of qualifying for the semifinals of the Indian Premier League (IPL) 2009.

Bangalore were one of the big disappointments in the inaugural IPL last year but they have performed much better this time round and one of the star performers for them has been none other than the former Indian captain Kumble.

He has been in terrific form and Bangalore are now benefitting from his leadership skills too as Kevin Peitersen handed over the captaincy to him while rushing to England for the Test series against the West Indies.

In the first place a very surprising move on part of the management of the Royal Challnegers Bangalore to have installed Pietersen as their captain after Rahul Dravid, who led them last year, had decided not to continue in order to concentrate on his batting.

Kumble should have been the automatic choice but he was ignored for the post and it was not until Pietersen had left when he finally got the opportunity he so richly deserved. He was the far better choice to lead Bangalore than Pietersen.

Pietersen might have been preferred because of his enterprising approach towards the game but what the movers and shakers of the Bangalore team had so conveniently forgotten that the nerves of steel are as handy as anything else.

Kumble has led the turnaround for Bangalore and even coach Ray Jennings has acknowledged that Kumble's tenacity and hunger to win have greatly helped in lifting the morale of the side.

Kumble's bowling and field placing have been spot on and it would come as no surprise if his team go on to win the glittering trophy that was clinched by another legendary leg-spinner, Shane Warne.

Kumble was streets ahead to his counterpart Virender Sehwag in every respect of the game when Bangalore overpowered Delhi Daredevils, having already qualified for the semifinals, at the Wanderers in Johannesburg on May 19. While Kumble was in total command of the situation from the word go, the usually flamboyant Sehwag was unable to regain his top form. The master blaster has been short of runs throughout the tournament and his team needs him to fire in the more important matches coming on.

Kumble's bowling was as accurate and deadly as ever. He was right on money from the first ball he delivered. The only blemish was proably the couple of leg side wides he bowled in his last over but he made up adequately by picking up another wicket to prevent any late onslaught from Delhi.