Posted by Syed Khalid Mahmood at 9:48 AM .
0 comments
Labels: Pak vs Aus

Isn’t amazing and unusual to find the mindset of the Australians being so negative? Although they did stage a comeback of sorts to win the low scoring third One-day International of the five-match series but their lackluster performance with the bat was terrible to say the least. 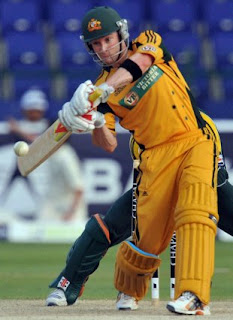 The pitch at the Sheikh Zayed Stadium in Abu Dhabi was certainly on the slower side but it wasn’t all that bad where Shoaib Malik, who doesn’t bowl regularly anymore, could not be taken for more than 22 runs in 10 overs. Leg-spinner Shahid Afridi was yet again allowed the kind of figures that would have made the champion of champions proud.

The Australians seem to be playing pathetic cricket at the moment, despite having moved to 2-1 lead with two more to play. They are treating the Pakistan slow bowlers with incredible respect, passing the impression that they are not even interested to take them on.

It will come as little surprise if the other part-time spinners in the Pakistan squad would also have dream spells when pressed to service. It’s just a matter of the chance coming their way. Every slow bowler from Pakistan would be hoping to get a bowl against this Australian side that’s struggling to put bat on ball.

It has been an uncommon sight during the past one decade or so when the Australians have been in this frame of mind. How often would you watch them settling for a score below 200 in a 50-over game.
The Australian team management has missed a trick or two in assessing the strengths and weaknesses of their rivals. They have gone into a shell, having taken it for granted that the Pakistan slow bowlers need not to be attacked.
Skipper Michael Clarke came to the rescue of his side in the third ODI to prevent further humiliation for his side. The Australian batting has remained patchy in the series and it was mainly due to his knock of 66 that allowed his team to reach a total of 198 that was defended successfully.
Clarke also rose to the occasion with the ball, although his performance was not as sensational as he has had against India. His three-wicket haul allowed the Aussies to regain control and the job was finished clinically was the fast bowlers.

Pakistan appeared to be coasting towards an easy victory when the new opening pair of Salman Butt and Ahmed Shahzad exceeded all limitations by putting on 95 for the first wicket.

Things, however, changed quickly when the big partnership was broken. Runs became hard to come by and the Australians lifted their fielding standards to create more pressure on the batsmen. 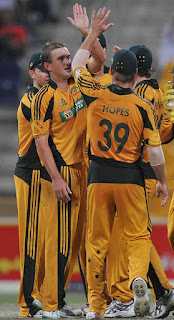 There was hardly any element of surprise in watching the movements of the experienced Pakistan batsmen. They passed the impressed as if they were playing against Bangladesh or Zimbabwe not Australia. They didn’t consider the spinners as threat and kept on playing adventurous shots.

The dismissal of Misbah-ul-Haq clearly reflected the lack of respect for the Australian spinners. Shahid Afridi survived as many as close calls as the number of runs he scored. Shoaib Malik batted gallantly and the match was not over until was there. In the end it were the Australian fast bowlers who returned to run through the lower order.
readmore »»