The countdown to the ICC World Cup 2011 has already begun and the mega event is just a couple of months away now. Four of the greatest cricketers of all time, Imran Khan, Kapil Dev, Arjuna Ranatunga and Viv Richards, were in attendance in a ceremony held recently in India in connection with the upcoming tournament.

It’s not often when these legends have been found under one more roof and more specifically in the company of each other. Their reunion instantly brings to memory their extraordinary performance in the past editions of the World Cup.

Viv Richards (now Sir Vivian) had not exploded in the role of a master in the inaugural World Cup in 1975 but his amazing fielding in the final when he ran out quite a few dashing Australian batsmen with brilliant throws helped the cause of the West Indies immensely in getting crowned as the champions. 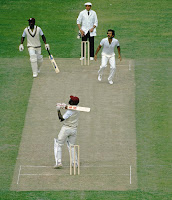 Richards had enhanced his reputation by the time the next World Cup was played four years later. He lived to the billing and it was his magnificent century in the final against England that allowed his team to retain the trophy rather leisurely in the end.

He was easily the most destructive batsman in the world when the West Indies came out to England in 1983 with very high hopes of completing a hat-trick of title wins. They were on course of accomplishing this feat with Richards playing another cameo in the final, this time against underdogs India.

It took a spectacular running catch from the Indian captain, Kapil Dev, to remove Richards from the scene and the complexion of the game changed soon afterwards. It was Kapil Dev, not Clive Lloyd, who received the trophy at Lord’s on June 25, 1983.
Pakistan and India, captained by Imran Khan and Kapil Dev respectively, were the overwhelming favourites to clash in the final in 1987 but neither of them could go that far. Both of them were eliminated in the semifinals much to the disappointment of the millions of their supporters. 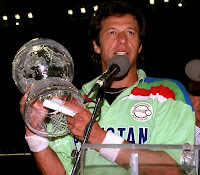 Imran Khan, by then a veteran all-rounder at the twilight of his illustrious career, didn’t have a particularly strong team at his disposal when Pakistan took the field in the World Cup in Australia in 1992.

Pakistan were languishing near the bottom of the table at the halfway stage of the tournament but then commenced their fairytale success and they exceeded all expectations by winning the event against the heaviest of odds. Imran was instrumental in lifting the morale of the side after the depressing defeats in the earlier games.

The Sri Lankans, however, were the favourites to win the World Cup in 1996 and they did exactly that under the shrewd leadership of Arjuna Ranatunga.

They were rewarded for playing sensational cricket and they pioneered the concept of pinch hitting from the outset. Their bold tactics worked to perfection as there was not much for the bowlers on the flat sub-continental pitches.
Ranatunga was chiefly responsible for taking the risk of attacking cricket. He himself batted very well, particularly his knock in the final against Australia at Qaddafi Stadium, Lahore, ensured there were no hiccups in the closing stages.
readmore »»