Second seed Asjad Iqbal, after having toppled top seeded Mohammad Asif in the semifinals, faced no problems in taming unseeded Shehram Changezi in the final to win the Jubilee Insurance 3rd Ranking Snooker Championship 2012 which concluded at the Karachi Gymkhana on June 21. 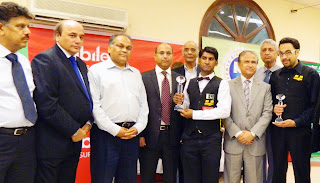 It was one of those tournaments where the seeded cueists were undone by those who were placed lower in the ranking.

Besides Asjad and Asif, Sultan Mohammad was the only other seed to make it to the quarter-finals with the quintet of Mohammad Sajjad, Naveen Kumar Perwani, Abdul Sattar, Vishan Gir and Mohammad Majid Ali getting eliminated before the knockout stage of the 10-day competition.

Shehram, having annexed the trophy in its debut edition in 2009, was unable to come to terms with Asjad in the final although he was the only cueist to have downed him during the course of marathon event whose league matches lasted seven days.

The 23-year-old Asjad was rewarded with a cheque of Rs 70,000 which he received alongwith the winner trophy from chief guest Javed Ahmed, Managing Director, Jubilee Life Insurance Company Limited.

Shoaib Ahmed Siddiqui, Secretary Youth Affairs to the Government of Sindh, presented the cheque of Rs 40,000 alongwith the runner-up shield to the 29-year-old Shehram from Islamabad.

Ali Rahim, President, Karachi Gymkhana, in his brief remarks on the occasion, touched on the sporting history of the club and pledged to continue the tradition of supporting the cause of sports. The Gymkhana’s Convener Sports, Mian Shaukat Hussain, was also present on the occasion alongwith a few other members of the Managing Committee which included his predecessor Jahangir Moghul.

Alamgir Anwar Shaikh, President, Pakistan Billiards & Snooker Association (PBSA), in his welcome address, praised the consistency of Asjad who has now won the last couple of national ranking tournaments within the space of a month. He also appreciated Shehram on his successful comeback in the domestic circuit.

The PBSA President recognized the extensive media coverage of the event, besides acknowledging the support of sponsors Jubilee General Insurance Company Limited. Their Managing Director, Tahir Ahmed, has been particularly enthusiastic in supporting the cause of cue sports.

Asjad, who lives in a village named Chak Chalis Shumaal, which is located 10 kilometres away from the town of Sargodha, was all smiles at winning the trophy. He proved that he was not overawed by the occasion and neither did the loss at the hands of Shehram earlier in the event deterred him from giving his best.

Shehram revealed that he was laid low by a stomach upset before the start of the final and he was unable to execute his plans to perfection in the all-important game.
readmore »»