The youthful duo of Ghias Khan and Kashif Shah emerged triumphant in the inaugural Dilshad Open Pairs Bridge Championship, organized by the Mind Sports Association of Pakistan (MSAP), at the Aslam Bridge Hall, housed in the National Stadium, Karachi, on April 23. 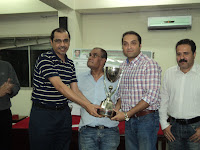 Youth dominated over experience on a day that saw quite a few seasoned campaigners taking the backseat and the stage was dominated by the young guns. Ghias Khan and Kashif Shah had the satisfaction of going past some of the big names of the mind sport in the country.

According to the official results released by the MSAP, Ghias Khan-Kashif Shah won the trophy by securing 62% points while Azwerul Haq-Ishaq Subhani (59.74%) and Tanvir Mazahir-Anwar Kazilbash (58.91%) finished second and third respectively among the 49 participating pairs in the tournament dedicated to the late Masud Saleem, acclaimed as one of the legends of the game.

Shahab Serki-Anisur Rahman came fourth their aggregate of 58.27% while Farhat Abbas-Syed Anwar Kamal ended fifth with their tally of 56.68%. 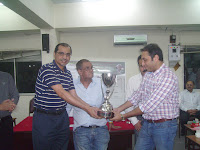 The championship named after Dilshad Ahmed, one of the popular bridge figures, offered a purse Rs 50,000 in prize money whereas it was originally planned to disburse Rs 30,000 among the top performers.

The one-day event was dedicated to the legendary Masud Saleem, who used to partner the great Zia Mahmood in what was Pakistan’s golden era in international bridge arena.

The venue of the event was changed in view of the tremendous response it received from the moment it was announced by the organizers. Originally it was announced to hold it at the DHA Creek Club but it was moved to the centrally accessible Aslam Hall, the hub of bridge activities in the metropolis, having the capacity to host more than 60 pairs at a time. 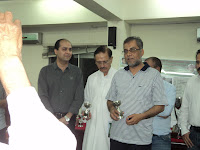 Rehana Saigol and Tariq Rasheed Khan, two of the former Presidents of the Pakistan Bridge Federation (PBF), added grace to the event by having participated in the championship.

Dilshad Ahmed, a veteran bridge player, who sponsored the championship, used to captain Deuces, one of the famed teams of the yesteryears. Nicknamed ‘Dillo’ he has remained popular in the bridge circles for a long time.

He has had the honour of having spent long hours at bridge table with the likes of Zia Mahmood, Masud Saleem, Jane-Alam Fazli, Nisar Ahmed Khan and Munir Ataullah. He has fond memories of the Nazimabad Club where he spent innumerable nights playing with his friends Shamsuz Zaman, Waheed Bux Quadri, Ismail, Quadri, Asghar Naqvi, Shehenshah, Jamal Nizami, Hasan Akhtar Zaidi and Syed Ameer Hasan.