KCCA vows to fight until dismissal of Ijaz Butt

In a rare show of strength the movers and shakers of the Karachi City Cricket Association (KCCA) vowed to take the fight to the camp of Ijaz Butt who was accused of having destructed the Pakistan cricket.

The trio of Prof Siraj-ul-Islam Bokhari (President), Prof Ejaz Ahmed Farooqui (Honorary Secretary) and Khalil Ahmed Nainitalwala (Vice President), backed by the zonal office-bearers, came out openly to criticize the Chairman of the Pakistan Cricket Board (PCB) in the harshest possible manner during a media briefing at the Karachi Press Club before joining the protesting young cricketers of the city in which a couple of cricket bats were burnt.

Although it was a warm first afternoon of the Holy month of Ramazan on August 12 the intensity of the protestors was rather high and the youngsters as well as the veterans present on the occasion chanted noisy slogans against Ijaz Butt and they demanded his immediate sacking to prevent further chaos.

The KCCA Vice President, Khalil Ahmed Nainitalwala, was in a furious mood as he had come prepared in the media briefing, substantiating his claims with facts and figures while raising the voice for the cricketers of city who have been victimized by Ijaz Butt and party for the past couple of years.

“I have no hesitation in calling it the Ijaz Butt Cricket Board instead of the Pakistan Cricket Board. Similarly we have been witnessing Ijaz Butt XI and not the national team of Pakistan playing against the various teams,” he declared.

“Isn’t it a tragedy that the team, being selected on the basis of nepotism, is getting hammered and the deserving cricketers are not being provided a chance to perform? Ijaz Butt’s blue-eyed boys are in the team despite failing repeatedly while the experienced campaigners like Danish Kaneria are sent home after just one failure. Why these double standards,” he questioned. 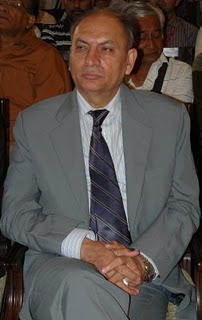 “It’s a shame that Ijaz Butt has crossed all limits of decency. Merit seems to be a piece of paper to him. He is just not bothered to look beyond his own circle of friends. He is not perturbed with the disgusting performance of the team that was touched rocked bottom of late,” Khalil Nainitalwala highlighted.

“What a pity that the Pakistan team these days is struggling to get 100 runs in an innings? It’s mainly because the talented and deserving boys of Karachi have been ignored even after their consistent performance in the national tournaments,” he added.

“Our batsmen Asad Shafiq, Khurram Manzoor and Khalid Latif performed much better than Azhar Ali and Umar Amin who have been taken to England where they have failed miserably so far. Similarly our bowlers Tabish Khan and Anwar Ali fared better than Wahab Riaz who was selected. Our fast bowler Tanvir Ahmed, who was the leading wicket-taker in the last season, has not been played in a single game yet in England which is very sad indeed,” Khalil Nainitalwala reckoned.

“We were waiting for the better sense to prevail that’s why we didn’t register our protest openly in the past. But the stage has come where we have to raise voice for our cricketers and since we have now come out in the open we will not sit back until Ijaz Butt is dismissed,” he replied when asked about the future course of action if status quo prevailed.
readmore »»