“We have also requested the Pakistan Billiards & Snooker Association (PBSA to look into the possibilities of launching a tournament at the national level for Under-15 or Under-17 which we are prepared to support. We believe that the youngsters hold the key to the future of the country and special efforts must be made to facilitate them,” he observed during a media briefing at the Karachi Gymkhana on January 26.

“As the major sponsors of snooker for the last few years, we take pride in having played our part in the development of cue sports. We are eager to see the game getting spread in every nook and corner of the country,” Tahir Ahmed explained.

The announcement was made by the PBSA President, Alamgir Anwar Shaikh, during the media briefing soon after getting the approval of the NJI Managing Director sitting next to him. 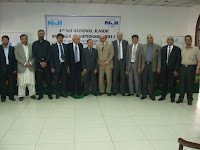 “After getting the nod of the sponsors right away we have decided to hold the National Championship from January 31 instead of the National Junior Championship which will now be organized at a later date,” Alamgir Shaikh announced.

Originally the media briefing was to be done for the NJI 4th National Junior (Under-21) Championship 2011 which was to be held at the Karachi Gymkhana from January 31 to February 5.

“The National Championship will start from January 31 but it will go on till February 6. 32 cueists will be featuring in the Nationals with four from each province making it to the final draw with the top 16 of the last ranking chart,” the PBSA President revealed.

“Another incentive for the winner of the upcoming National Championship will be qualification in the Asian Championship to be held in Indore, India, in April. Since Mohammad Sajjad is an automatic qualifier by virtue of being the last year’s runner-up we will be entitled to three entries this time,” Alamgir Shaikh said.

The country’s premier cueist, Mohammad Sajjad, who will defend his title in the 36th NJI National Snooker Championship 2011, will be the favourite to win the title once more in the presence of a group of veterans and s crop of new talent.

According to the draws of the championship, released by the PBSA, Imran Shahzad has been placed in the Group A alongwith Rambail Gul, Shah Khan and Abdul Rahman while the Group B comprises of Sohail Shahzad, Noman Awan, Arshad Siddiq and Zahoor Ahmed.