Australia at receiving end in a record chase 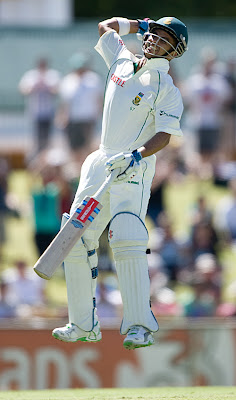 “Unlike the past, it could be the Australians at the receiving end this time round. The first Test is to be played at Perth where the pitch is known to have extra bounce and zip. With the presence of the fast bowlers like Dale Steyn, Makhaya Ntini and Morne Morkel in their ranks, South Africa have the edge over the hosts in the pace bowling department and they stand a very good chance of going one-up in the series.”

I had made the above observation in my write-up captioned ‘South Africa on a mission to tame Aussies’ on December 7. I have been proved right. It’s South Africa, not Australia, having drawn the first blood in the series between the top two sides of the world at the moment.

The South Africans have done it in style. They did let Australia off the hook so many times during the game but they had the last laugh. Their bowlers did the job of dismissing the hosts two times but it were their batters in the second innings who stole the limelight. They won the game so comfortably in the end even while chasing a record target of 414 on Australian soil.

It was the second highest successful run-chase in the history of the game but the highest-ever in Australia. More than anything it was the self-belief of the South Africans that helped them rewrite the history.

The record-breaking performance of the South Africans at Perth has put them in a commanding position and it would come as no surprise if they wrap up the series in the very next Test. 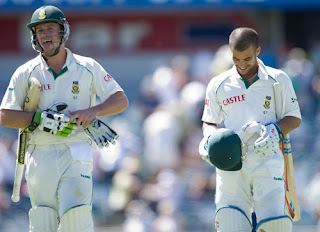 The Australians, still the top ranked side, has had the knack of fighting back in the recent past but one should not lose sight of the fact that they are not the team they used be in the days of Steve Waugh, Mark Waugh, Justin Langer, Shane Warne and Glenn McGrath. Their batting still has considerable depth and experience but the same cannot be said about their bowling.

The South Africans are ideally poised to apply further pressure on the Aussies and knock them down in their own backyard. Ricky Ponting and his men would be eyeing a comeback in the series but the momentum is with Greame Smith who is leading his team by example.

It was the skipper himself who set up the record chase. His positive outlook yielded the results. He had lost his opener partner Neil McKenzie early on but he kept attacking and his brilliant hundred kept his teammates motivated. They were on a mission to accomplish something never done before.

At the start of their innings it was hard to imagine South Africa could get to the target of 414. But Smith’s 108 had brought the target down to 187 with seven wickets in hand, something that looked achievable.

A B de Villiers played the innings of his lifetime on the final day and he got the desired support from the vastly experienced Jacques Kallis and the debutant Jean-Paul Duminy. Their combined effort took South Africa to the record target and Duminy, playing in the place of the injured Ashwell Prince, had the satisfaction of hitting the winning runs.

It was quite extraordinary to find the South Africans reach the target with remarkable ease in the end. Mark Boucher looked tense padded up but he was not even required to bat. A magnificent unbeaten from the ever-improving de Villiers and an equally important half century by Duminy prevented any panic and the historic match was won so comprehensively by the visitors.
readmore »»