Tendulkar produces yet another classic knock 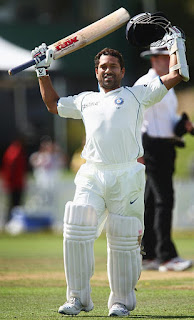 Sachin Tendulkar’s century number 42 in Test cricket on March 20 was yet another masterly knock from the Grand Master. Even though it was scored against an opposition not having big guns the conditions were quite difficult for batting and it was his sheer class that saw him dominate the bowling for the better part of his stay at the crease.

Tendulkar was unconquered on 70 when the stumps were drawn on the second evening, a few overs before the scheduled close of play due to the fading light, in the first Test against New Zealand at the Seddon Park in Hamilton.

Although the number of spectators at the ground was not all that high from the sub-continent standards when the play started on the third morning it’s believed that the majority of the one billion people back home in India are believed to have set an early morning alarm in anticipation of another Tendulkar hundred.

The occasion was worth compromising the sound sleep. The manner in which Tendulkar resumed his innings gave an indication that he was aware of the fact that his every movement was being followed at home.

What a cracking start he had to the day. The backfoot punches were a treat to watch as were the classic cover drives. He penetrated the field without taking risk and the score kept ticking over at a brisk pace.

He had moved from 70 to 99 in no time but there was a pause when he was just a single away from the landmark. In fact he was rather unlucky not to have completed his hundred with the cover drive that fetched him three runs instead of a boundary as Daniel Vettori made a spectacular save.

There were anxious moments with a few maiden overs on a trot. Tendulkar’s problems were compounded by the lack of support from the other end as skipper Mahendra Singh Dhoni was struggling to rotate the strike.

Since he has been dismissed so many times in the 90s during the past few years, it always is a relief whenever he reaches the magical three-figure mark. He was mighty pleased when he got the single to his 42nd hundred in Test matches. 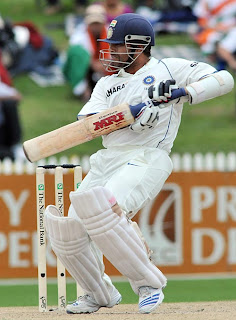 He needed only 168 balls to reach his century as he had remained positive from the moment he set his feet in the ground a day earlier. He was in complete control of the situation and he was not in any mood to give it away.

His stroke-play continued even after he had brought up his hundred as he kept punishing the loose balls at will. He was equal to the task while defending the good balls, hardly giving the bowlers any chance.

He completed his 150 in the afternoon session but he didn’t last long after that. Iain O’ Brien, looking the most threatening of the New Zealand bowlers, ended the majestic innings by having the master batsman caught in the slips by Ross Taylor for 160.

Tendulkar occupied the crease for exactly 400 minutes on a pitch that always kept the bowlers interested. The overcast conditions encouraged the seam bowlers but he dominated them in a fashion only he could have done.