The twin Jubilee Insurance companies, Jubilee General Insurance and Jubilee Life Insurance, have renewed the pledge to continue supporting the cause of snooker and they have urged for the creation of an Under-15 circuit at the national level. 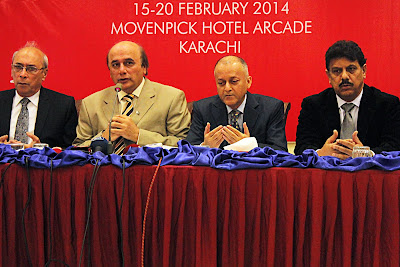 “Now the time has come for the Pakistan Billiards & Snooker Association (PBSA) to mobilize their resources to start Under-15 tournaments which could bring about a revolution of sorts at the grassroots level. It’s about time to rope in the promising athletes early in their teens and groom them for the future,” and Tahir Ahmed, Managing Director, Jubilee General Insurance, remarked during a media briefing at the Karachi Gymkhana on February 13.

“The junior circuit has been playing a crucial role in boosting the Pakistan snooker. It has provided the platform to the talented youngsters and they have grabbed the opportunity with both hands. Most of the top cueists of the country are young which augurs very well for the future of the sport,” Tahir Ahmed added.

“The juniors hold the key to Pakistan’s future. Let’s provide them the opportunities and the facilities they deserve to move forward,” he suggested.

The PBSA President, Alamgir Shaikh, who was recently elected unopposed as the Senior Vice President of the Asian Confederation of Billiards Sports (ACBS), agreed to the suggestion of the major sponsors of snooker in Pakistan and vowed to find ways and means to launch an Under-15 circuit in the near future.

He, however, remained more concerned about the continued delay in the release of funds by the government and he didn’t rule the possibility of staging a sit-in in the federal capital later this month if the promises were not fulfilled by the Ministry of Inter-Provincial Coordination (IPC).

Meanwhile Mohsin Amin will defend his title in the Jubilee Insurance 6th National Junior (Under-21) Snooker Championship 2014 which will be getting underway at the Movenpick Hotel Arcade in Karachi on February 15.

Alongwith the four provinces, Islamabad will also be represented in the latest edition of the National Junior Championship which offers prize money of Rs 105,000 with the winner to collect Rs 40,000 and the runner-up to receive Rs 20,000.

The tournament, whose winner and runner-up will earn the right to represent the country in the 15th Asian Under-21 Snooker Championship 2014 due to be staged at Mohali, India, in April, will be contested by a total of 34 junior cueists from all over the country, having qualified for the event by virtue of their outstanding performance in their respective provincial cups held recently.

It was revealed that Mohammad Majid Ali, who ended runner-up in the last edition of the Asian Junior Championship, has been granted direct entry which has allowed Pakistan to field three, instead of two, cueists in this year’s continental event.
readmore »»