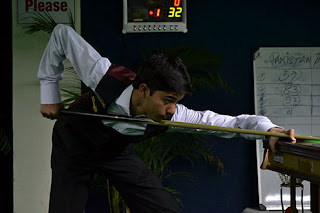 The Pakistani youngster put his nose in front once more by taking the seventh frame and his rival fought back to snatch the eighth frame. It was Saengkham’s chance to move forward when he compiled a break of 66 in the ninth frame. This time Majid Ali drew level by clinching the tenth frame. The decisive eleventh frame went to the wire with the cueist from Thailand emerging triumphant in the closest of duels.
readmore »»