Skipper Abdul Basit’s fine all-round performance powered Qadri Public School into the final of the Omar Trophy Inter-School Cricket Tournament 2016, being organized by the Pakistan Veterans Cricket Association (PVCA), as they defeated Springfield School by three wickets in the first semifinal at the National Stadium Karachi on November 11. 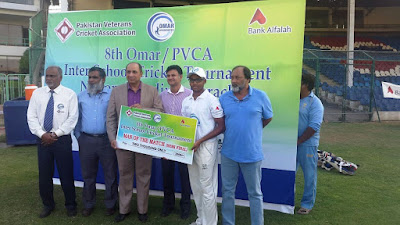 The other semifinal will be played between Fahad Academy and Kamran Public School at the same venue on November 12 and its winners will take on Qadri Public School in the final also to be staged at the National Stadium on November 13.

The captain led by example as Abdul Basit, adjudged Man of the Match, came out trumps with both bat and ball to become the difference between the two evenly matched sides in what turned out to be rather close encounter. He received the award from chief guest Syed Asad Murtaza, Marketing Manager, Bank Alfalah Limited.

Qadri Public School, after a superb opening stand, suffered a horrible middle-order collapse in pursuit of the target of 166 in 40 overs before eventually getting it with only three wickets and four overs in hand.

Batting first, after winning the toss, Springfield School recovered to post a fighting total of 165, after having lost the first four wickets with only 45 runs on the board. Ibad-ur-Rahman led the recovery with a fluent half century, striking seven boundaries in his 54 off 59 balls.

Then Badar Qureshi, who came at number nine, got some useful runs under pressure. He whacked four boundaries in 32 off 37 balls, dominating the 32-run last wicket stand with Taimur Mustafa whose contribution was a mere couple of runs.

Qadri Public School’s medium-pacer Mohibullah Shaikh (4-35) rocked the top order while the off-spin of Abdul Basit (2-29) helped in bowling out Springfield School for 165 in 36 overs.

Abdul Basit (57 off 78 balls) then featured in 95-run opening partnership with S M Shaheer (51 off 63 balls) which put them in the driving seat. Both the openers hammered seven boundaries in their half centuries. Springfield School fought back through the spin duo of Badar Qureshi (3-29) and Ibad-ur-Rahman (2-20) which saw the batting side slump from 131 for one to 151 for six.

Medium-pacer Saim Ayub also took a couple of crucial wickets in his second spell to open up the contest but Qadri Public School was taken over the line by S M Sharjeel who remained undefeated on 24 off 32 balls with the help of two fours.
readmore »»