Touch of Sharjah at Abu Dhabi

Many people watching the fifth and final One-day International between Pakistan and Australia at the Sheikh Zayed Stadium, Abu Dhabi, on May 3 were reminded of Sharjah that had become famous for producing the most unexpected of results. 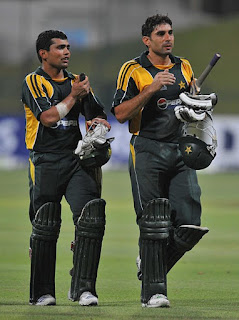 Australia, with the series in their bag, posted the highest score of five games but failed to defend it successfully. The Aussies had appeared on the verge of a 4-1 victory when Pakistan crashed to 56 for three before the record partnership between Kamran Akmal and Misbah-ul-Haq turned the tide decisively.

Some of the events of the game were as strange as they used to be in Sharjah where the strongest of teams used to be blown away on a given day. The most amazing part was the reluctance of the Australian batsmen to go after the bowling in the death overs.

How often would you see a team add only 64 runs to its total in the last 10 overs of the innings in a limited overs game and that too without having lost a single wicket during the period?

The platform was set for a final onslaught. Having reached a total of 186 for four at the end of 40 overs Australia were ideally placed to extract something around 80 to 90 from the final 10 overs that would have taken their total in the vicinity of 275.

Shane Watson and Callum Ferguson had the credentials to tear apart the bowling on a pitch that was as flat as one would have imagined. But what they did in the final phase of the innings amounted to making a mockery of the game.

Their dead-batting in the 48th and 49th overs must have caught everyone by surprise. They were only helped by some wayward bowling and pathetic fielding that earned 10 runs in the final over to raise the total to 250.

Watson and Ferguson didn’t make serious efforts to hit boundaries. That’s what one would have expected from the two well-set batsmen in the closing stages of the innings. They were keen only in rotating the strike when even the tail-enders attempt to hit out to the best of their abilities. They made a mess of the batting powerplay overs as well.

By limiting themselves to 250, Australia kept the game open. By the look of things they didn’t desire the match to become one-sided that could have been the case had they got to somewhere around 275. 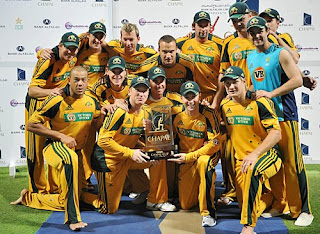 That Pakistan would make heavy weather of target of 251 is another matter. The early wickets pegged them back and there was a feeling that the Aussies will seal the fate of the match.

Enter Kamran Akmal and the complexion of the game changed. The wicketkeeper-batsman needed just 115 balls to register his fifth ODI century and Pakistan, against all odds, were successful in chasing down the big target. Misbah-ul-Haq kept his company till the end and their unbroken stand of 198 was a new record for the fourth wicket against Australia.