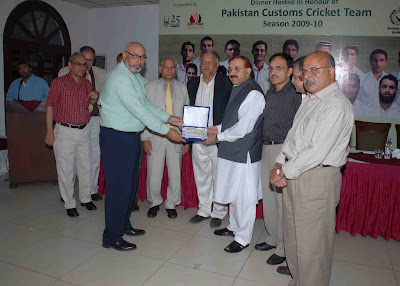 Sher Nawaz, Chief Collector of Customs, South, declared in a recent function at the Karachi Gymkhana that the department was right behind the CCA and all their problems will be attended on an urgent basis.

He was speaking as the chief guest in the dinner reception hosted by the CCA in the honour of the 20-member Customs cricket squad representing the department in the ongoing Quaid-e-Azam Trophy Championship 2009.

“We take pride in owning the CCA whose accomplishments deserve recognition. It’s very heartening to note that a youthful Customs team is taking part in the Quaid-e-Azam Trophy this season and we are confident that quite a few of the youngsters present here will go on to serve the country,” Sher Nawaz hoped.

He urged the CCA to concentrate on their good work of training and grooming the youngsters without worrying for the administrative matter that his department would be taking care of.

Nasir Masroor, Collector of Customs (Appraisement), also pledged support to the CCA and advised the young cricketers to work harder to bring more glories for the department and the country.

Khalil Masood, an ex-Collector of Customs, who pioneered the idea of supporting the cause of sports from the grassroots level, expressed his delight with the performance of the CCA in their first 10 years.

“Jalaluddin and his coaching and administrative staff at the CCA have done an exceptional job, having made the most of the available resources. Now it’s time for them to move on and produce a young crop of cricketers who could serve the cause of the country,” Khalil Masood remarked.

Two other Collectors of Customs, Fazle Qalbani and Shoukat Ali, were also appreciative of the efforts of the CCA.

The founder and the chief coach of the CCA, Jalaluddin, in his welcome address, pointed out that the presence of the top officials of the department was going to dispel the impression that the academy didn’t enjoy the departmental support. 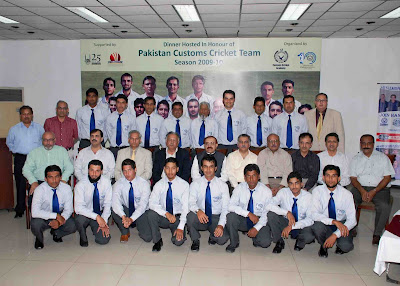 While acknowledging the contribution of the top brass, he highlighted the achievements of the CCA and disclosed the plans of expansion.

The former Test fast bowler requested the Chief Collector to look into the possibilities of providing jobs to the cricketers playing for the department, emphasizing that it would help in retaining those gifted players who drift to other institutions offering them jobs.

Jalaluddin, who is often remembered for the being the first bowler to record a hat-trick in One-day Internationals, believed that the young lot of cricketers presently serving the Customs team would be coming of age in not too distant future.