How many more presents for New Zealanders in India?

The New Zealanders be been feeling delighted to be in India at the moment. They must be feeling over the moon with their exploits because they could not even have thought in their distant dreams of coming up with this kind of performance.

What was being branded as a mismatch before the start of the series, not surprisingly, has become quite a contest now and the fate hinges entirely on the outcome of the third and final Test. Cricket we all know is a funny game but not everyone knows how far the Indians could do in enlivening proceedings out of a dead game.

This is certainly not for the first time. The Indians have had this tendency of obliging the underdogs, more so in their own den. No wonder the teams like New Zealand and Zimbabwe are the major beneficiaries when India are the overwhelming favourites in a home series in particular.

I think it’s just a matter of the history repeating itself here. At least I won’t be surprised if New Zealand go on to clinch the Test series and then also claim the series of five One-day Internationals that follows. In fact it looks quite likely now that the New Zealanders would be allowed to compete in each and every game of the tour.

The Indians have done it so many times against New Zealand previously, having let them dominate and win from position of nowhere. 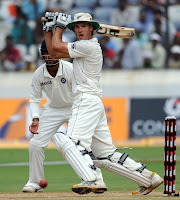 The Indians, fresh from a resounding 2-0 win over Australia in the Test series, were being expected to blank the Black Caps, who had been whitewashed at the hands of Bangladesh in the ODI series just a few weeks ago.

But look at the Indians how they have controlled the series against New Zealand, a totally disjointed and depressed side at the start of the tour. It needed quite an effort and sacrifice on part of the hosts to let the New Zealanders come at par with them.

What happened in the first Test at Ahmedabad was nothing short of disgrace to cricket. India had to work extremely hard to get bowled out for less than 500 in the first innings after having got to 300 for the loss of just one wicket. The likes of Sachin Tendulkar, VVS Laxman, Mahendra Singh Dhoni and Suresh Raina had to fail in order to ensure a smaller total than anticipated.

The Indian bowlers had to work even harder to facilitate the inexperienced New Zealand batsmen post a much higher total than their capabilities. Then we witnessed the sight of the mighty Indian batting order to collapse to 15 for 5 against a bowler who never looked threatening or devastating.

In the second Test at Hyderabad the hosts were found to be even more generous than the first game. The New Zealand opener, Tim McIntosh, having bagged a pair in the first Test came very close to scoring a century in each innings while the flashy wicketkeeper, Brendom McCullum, was gifted with his maiden double century.

What next India? Should we see the remaining New Zealanders returning their career best performance in the third and final Test or will we get a break for a change.
readmore »»