A record number of 109 teams from every nook and corner of the country will be participating in the 17th National Seniors Cup Cricket Tournament 2015 which gets underway on January 18. 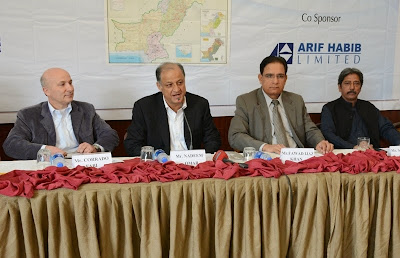 The inaugural Match of the Southern Zone will be played between Karachi Gymkhana and Karachi A A Pakwan at the Karachi Gymkhana Cricket Ground in which Nadeem Omar, Managing Director, Omar Associates (Pvt) Ltd, will be the chief guest. The Northern Zone matches will also be starting simultaneously at the upcountry venues.

The salient features of the tournament, being sponsored by IMI Omar (Pvt) Ltd with Arif Habib Group being the co-sponsors, were unveiled by Fawad Ijaz Khan, Chairman, Pakistan Veterans Cricket Association (PVCA), in a well-attended media briefing here at the Karachi Gymkhana Banquet Hall on January 17.

He revealed that the total cost on the tournament, during which a record 218 matches will be held, was estimated to be in the region Rupees five million which includes the prizemoney of Rs 609,000. He explained that the operational costs were on the higher side while organizing the Northern Zone matches.

It was disclosed that the 109 participating teams from 61 cities have been divided in 29 Groups. There will be 72 outfits from Punjab, 18 from Khyber Pakhtunkwa and Islamabad , 10 from Karachi and Balochistan and nine from the interior of Sindh. The national final, to be telecast live, will be played between the champions of North Zone and South Zone here at the National Stadium on April 19.

Corrado Fabi, Chief Executive Officer, IMI Omar (Pvt) Ltd, spoke about his growing love for the game of cricket and right away offered to double the sponsorship amount for the tournament.

“Football is the most popular sport in Italy where I live with motor racing being next on the list. I have been introduced to cricket by Nadeem Omar and I have found the game quite thrilling one. Watching the passion which everyone has for cricket here, I am sure the sport has a firm foothold in Pakistan,” Corrado Fabi, himself a former Formula One driver, observed.

The owner of one of the most famous talc producing companies, IMI Fabi, expressed his delight at the success of the National Seniors Cup Cricket Tournament which has been organized by the PVCA annually for the past 17 years.

“It’s an uphill task managing such an event in which teams from every part of the country is encouraged to take part. It’s really a phenomenal achievement to have been able to do regularly for so long,” he commended.

The Pakistan Veterans Cricket Association (PVCA), established in 1998 at Karachi , is registered with the Securities and Exchange Commission of Pakistan (SECP) since 2001 as the sole representative cricket organization for Seniors/Veterans Cricket in Pakistan.

Having attained international recognition, besides proving its organizational mettle at the national level, the PVCA has been actively promoting schools cricket alongside the seniors, veterans and also the super veterans cricket.

The National Seniors Cup, played annually amongst the selected teams of various cities, has become the flagship event of the PVCA since 1998. Omar Associates are the defending champions this year.
readmore »»