Not much element of surprise in yet another scandal

I was invited in a talk show aired live by Business Plus on August 30 in which the topic of discussion was the latest controversy having engulfed the Pakistan cricket.

Understandably nearly every television channel in the country has continued non-stop coverage of the massive scandal ever since it had broken out during the course of the fourth and final Test between England and Pakistan at Lord’s.

Anchorperson Shahzeb Khanzada had done quite a bit of research from the various sources and he was ready with probing questions as the show started immediately after the news bulletin at 8.10 pm.

Prior to the 8 pm news bulletin, the viewers of Business Plus had watched a fiery talk show featuring former Test cricketers, Sikander Bakht and Shoaib Mohammad, and sports journalist, Ehsan Qureshi.

The viewers as well as the anchorperson were stunned when I made it clear that I was not surprised when enquired about my immediate reaction at learning about the implication of a few of Pakistan’s cricketers in the latest case.

My cell phone had started buzzing once too often since the day the story was carried by the British media and my reply to everyone was that they should wait until the matter is probed before jumping into any conclusions.

The reason why I am not surprised because the Pakistan cricket has been in a state of anarchy for the last couple of years and there has been complete lawlessness ever since Ijaz Butt has been nominated as the Chairman of the Pakistan Cricket Board (PCB).

It’s the single greatest blunder by the President of Pakistan, Asif Ali Zardari, who is also the Patron of the PCB. The appointment of Ijaz Butt as the PCB chief was not viewed with suspicion because the cricket circles had expected him to mobilize the available resources for the betterment of the game.

Unfortunately Ijaz Butt has proved to be a complete failure and he has been instrumental in causing irreparable damage to the national interest. In this context the office of the President has not taken the measures to remove him despite repeated requests by the various quarters including the parliamentarians. 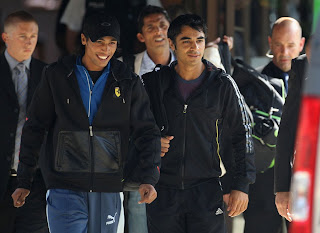 The situation has come to stage when you are never sure what’s coming next. With the cronies of Ijaz Butt accompanying the national team on the various tours under the cover of ‘officials’ any thing can be expected when the boys are under nobody’s administrative control.

With the aspect of discipline missing from the Pakistan camp you can always be prepared for one controversy or the other. When there is no rule of law you are always more likely to have chaos than not.

The likes of Yawar Saeed and Shafqat Rana are being obliged by Ijaz Butt on a consistent basis and the decision to involve Waqar Younis and Ijaz Ahmed in the management of the team, overlooking the recommendations of a Chief Justice, was too big an adventure.

Whatever the fate of the Pakistan cricketers in the latest case of spot fixing, one thing is crystal clear than these youngsters do run the risk of getting engaged in wrongdoings in the absence of proper guidance and lack of discipline at every level.
readmore »»