Anwar Mooraj and Mohammad Shahid emerged champions in the chess and scrabble tournaments respectively of the ongoing Karachi Press Club’s Summer Sports Festival 2010 being supported by the Government of Sindh.

The results were compiled and released by the Mind Sports Association of Pakistan (MSAP), who organized the week-long chess and scrabble event with the collaboration of KPC’s Sports Committee, very nicely indeed. 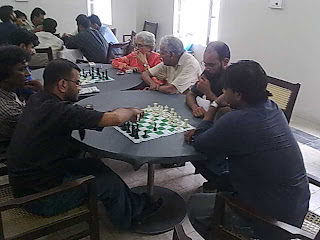 Anwar Mooraj won the chess competition by securing eight points while Mohammad Shahid took the snooker title with a spread of +55.

Anwar Mooraj stood out with eight points while the trio of Mohammad Shahid, Hasan Mansoor and Nargis Khan had six points each. Aziz Narvi and Kamran Sohail were next on the list with five points each and they were followed by Mohammad Yasir, Afaq Mustafa, Hamid-ur-Rahman and Syed Javed Iqbal.

Tariq Rasheed Khan, Director, MSAP, and President, Pakistan Bridge Federation (PBF), was chiefly responsible in making both the tournaments a success despite the lower turnout than was being anticipated.

A firm believer of professional management, Tariq Rasheed made things comfortable for the KPC Sports Committee by taking care of the entire technical side from start to finish. He posted a team of officials who were well versed in conducting such events. The intensity was not lost or even dampened by the spells of rains that also played a part in disturbing the originally chalked out schedule.

The MSAP officials did show the flexibility that was so essential in keeping the participants interested. The KPC members were allowed to incorporate changes in their schedule with the consent of their opponents in order to minimize the walkovers as the idea was to have maximum possible matches in the allotted time.

The MSAP representative, Azhar Javed, was also gracious enough to extend the chess tournament by a day to accommodate those who couldn’t make it due to an unusually long spell of rain that did cause considerable traffic jams at various locations. 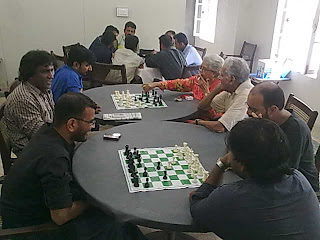 So the chess tournament actually last five days instead of the originally planned four. All the participants were provided ample opportunity to demonstrate their skills on the chess board and we witnessed some interesting contests besides getting unexpected results.

The participation in the scrabble competition was even lower but it was very heartening to find Tariq Pervez handle the event very professionally without losing interest. In fact he was even prepared to coach the KPC members after they had played their matches.

The card room of the KPC, that hosted both the mind sports events, was wearing a festive look all along and one can hope for a larger pool of members participating in such contests in future.
readmore »»