“What greater gift we can give to our community on Independence Day than a polio-free Pakistan? Let’s continue mobilizing all our resources in wiping out this disease as soon as possible.” 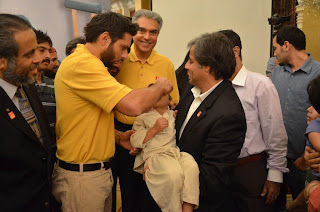 This was the message given by Aziz Memon, National Chair for Rotary Polio Plus Committee, on the eve of the 65th Independence Day of Pakistan falling on August 14.

“Our efforts are yielding results. There were 77 cases of polio on August 14, 2011 which has now been brought down to 28. We have been working with missionary zeal and will work even harder to accomplish our cherished goal of completely wiping out polio from Pakistan,” Aziz Memon, who has been the Governor of Rotary International’s District 3270 covering Pakistan and Afghanistan, stated.

“Out of the 28 polio cases at present, as many as 20 relate to the regions of Khyber Pakhtunkhwa and Federally Administered Tribal Areas (FATA) while three each are in Sindh and Balochistan and two in Punjab. No case has been reported from Karachi for the last year and a half,” he disclosed. 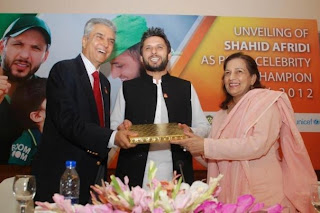 “Pakistan is making real progress towards eradication of polio. And we have been supported by the celebrities of the highest stature in order to boost interest in the campaigns aimed at ensuring that every child in Pakistan is vaccinated,” Aziz Memon believed.

He hailed the appointment of Shahid Afridi as Goodwill Ambassador of Rotary, saying that the immense popularity of the celebrated cricketer already worked wonders in the Polio Eradication Campaign.

“The popularity of enterprising all-round cricketer Shahid Afridi, our Goodwill Ambassador, has proved greatly helpful in raising awareness about the disease of polio in Khyber Pakhtunkhwa and FATA in particular,” the Rotary leader remarked.

“Shahid Afridi has proved helpful in two ways. On the international front he has received more tweets and likes on the social media than any other celebrity associated with Rotary during the past one month while his massive appeal in Khyber Pakhtunkhwa and FATA, where polio cases are the highest in the number, has enabled us to raise awareness about polio in these particular areas,” Aziz Memon revealed. 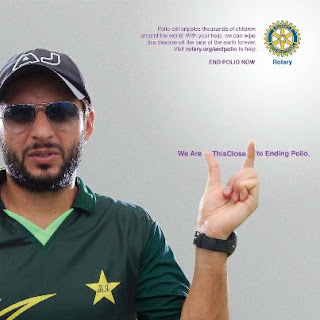 Shahid Afridi, hailing from the Khyber Agency of FATA, had formally joined hands the Rotary International’s National Polio Plus Committee last month, proved instrumental in influencing high-risk groups in the regions of Khyber Pakhtunkhwa and FATA in the July polio vaccination rounds.

“By joining hands in a noble cause Shahid Afridi has once again proved that he cares for the community. He brings smiles on their faces with his aggressive intent in the cricket field. Now he is proving a real hero by saving the lives of the children,” Aziz Memon reckoned.

“Shahid Afridi, famous with his nickname of Boom Boom among cricket fans, has given his message in Urdu as well as Pushto, urging the people to cooperate with the vaccination teams so that every child could be administered polio drops without hassles,” the Rotary functionary added.

“His appearance in the polio ads has earned huge mileage because of immense popularity, particularly in the Pushto-speaking areas. Last year 79% of the polio cases came from Pushtoon families. We are confident that his cricketing credentials will continue coming handy in eradicating polio from this region,” Aziz Memon concluded.
readmore »»