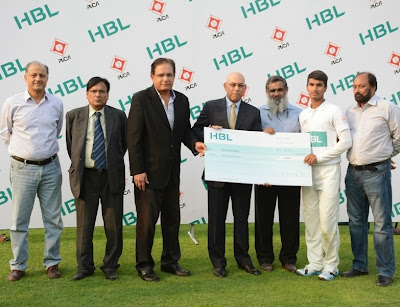 Beaconhouse School North Nazimabad’s opponents in the final, to be staged on December 3, will be the winners of the second semifinal, to be contested between Fahad Academy and St Paul ’s School on December 2.

The tournament is being organized by the Pakistan Veterans Cricket Association (PVCA).

The semifinal between Beaconhouse School North Nazimabad and Kamran Public School turned out to be a very absorbing one with the outcome in doubt until the winning runs were scored.

Electing to bat, after winning the toss, Kamran Public School lost their last seven wickets for 36 runs to be bowled out for 208 in 38.4 overs. Openers Ammad Alam (32 off 26 balls) and Abdul Moiz (22 off 26 balls) provided them a rollicking start and the 96-run fourth wicket partnership in 22 overs between Hasan Mohsin (71 off 75 balls) and S M Hasnain (52 off 61 balls) consolidated their position.

It was the trio of left-arm spinners, led by Waleed Hasan (4-21), which derailed their innings. Izaan Waqar (2-36) and Ahmed Salman (2-40) also chipped in with useful wickets to limit the Kamran Public School score.

Set to score 209 in 40 overs, Beaconhouse School North Nazimabad found itself in disarray at 80 for five before rescued by a punishing 108-run sixth wicket stand off only 67 balls between Hassan Khan and Ammar Iqbal.

Coming in at number three, Hassan Khan blasted nine sixes and eight fours in his sensational knock of 109 which came off only 49 balls. He was absolutely brilliant in his stroke-play which severely jolted the fielding side.

The match came alive again after his dismissal when wickets started tumbling again but it was Ammar Iqbal who stood firm and guided Beaconhouse School North Nazimabad to victory. He remained undefeated on 46 off 59 balls as his team won the match with just two wickets in hand.

Leg-spinners Ammad Alam (3-38) and Hasan Mohsin (3-51) bowled well for Kamran Public School but couldn’t win the day for their side. The Man of the Match award was clinched by Hassan Khan of Beaconhouse School North Nazimabad for his whirlwind century.