Omar Cricket Club regained the title by edging out Qasmi Gymkhana by three runs in a thrilling final of the 33rd Karachi Gymkhana Ramazan Festival Twenty20 Cricket Tournament 2018 for the Omar Associates Trophy at the Karachi Gymkhana Cricket Ground on June 13. 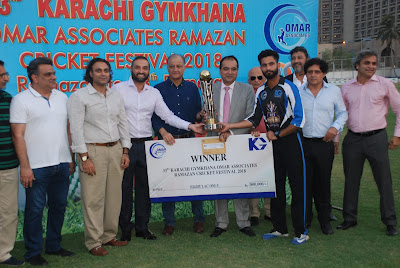 It was in the fitness of things that the title clash turned out to be the most exciting of all 31 matches of the tournament. With four runs needed on the last ball it was anybody’s game until the very end.

Omar CC, fielding with 10 men only, controlled its nerves better to be the deserved winners of the trophy.

The champions, Omar CC, felt hard done, however, at the controversial decision of the umpires, Riazuddin and Muhammad Shakil, for not having allowed them a substitute fielder in place of Umar Akmal and they had to field with 10 men for the better part of their opponents’ innings.

Qasmi Gymkhana fought back through the spin duo of Hasan Sardar (3-18) and Wasim Ali (2-41) with medium-pacer Kamran Hussain (2-26) also bowling well to limit the damage. 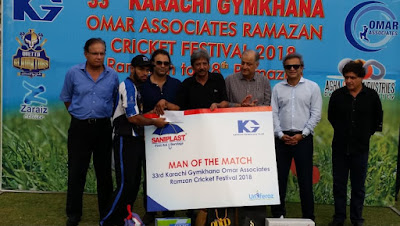 Set to score 180 in 20 overs, Qasmi Gymkhana got off to a sluggish start, scoring 70 in the first 10 overs and losing four wickets. But breezy knocks from Kamran Hussain (41 off 21 balls) and Faizan Ahmed (25 off 13 balls) opened up the game ensuring a tight finish.

Left-arm spinners Muhammad Asghar (3-18), named Man of the Match, and Irfan Gohar (3-37) played the lead role in restricting Qasmi Gymkhana to 176 for eight off 20 overs.

Nadeem Omar, President, Karachi City Cricket Association (KCCA), who was the chief guest in the prize distribution ceremony, presented the winners’ trophy to the Omar CC skipper, Saad Nasim, alongwith a purse of Rupees eight lacs while a cheque of Rupees four lacs was collected with the runners-up trophy by the Qasmi Gymkhana captain, Abid Qasmi. 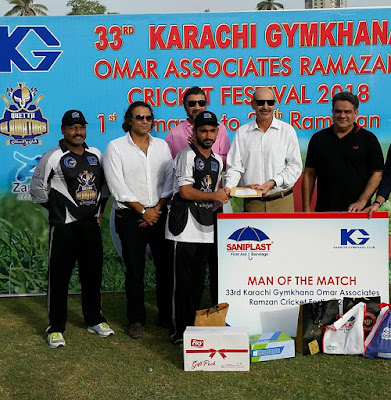 The total prize money of the tournament, sponsored by Omar Associates (Pvt) Ltd for the sixth year running with Agha Steel Industries, Acme Technologies and Zaraiz Atelier being the co-sponsors, was well over Rs 16 lacs which included individual awards of Rs 313,000.
readmore »»