Mansur Ali Khan Pataudi has become the latest casualty of the Indian Premier League (IPL) which has witnessed monumental shift in policies following the unceremonious exit of its Commissioner, Lalit Modi.

There were three former Indian captains, all of them enjoying legendary status for their exploits in the cricket field, on board with the charismatic yet controversial Modi, who had proved himself a go-getter of the highest order.

Two of the former Indian greats, Sunil Gavaskar and now ’Tiger’ Pataudi have withdrawn from the IPL Governing Council and the only one left is Ravi Shastri, who has somehow agreed to work voluntarily.

Interestingly Gavaskar had played under the captaincy of Pataudi in the 1970s and Shastri arrived on the international scene when Gavaskar was leading the Indian team at the start of the 1980s.

Modi, whose organizational capabilities were awesome, must have considered many factors before inducting the trio of Pataudi, Gavaskar and Shastri in his team to kickstart the IPL. The council obviously became heavyweight with the inclusion of these former greats and there was no harm in remunerating them for their services.

At least it appeared a transparent deal with no hidden benefits or anything of that nature. Paying these former cricketers in lieu of their services was a fair deal for all practical purposes. Even the figure of Rs one crore for each of them didn’t look astronomical in context of the status they enjoyed in cricket and the value they added to the council.

With Modi out of the equation, in controversial circumstances, the Board of Control for Cricket in India (BCCI) is now pushing for total control of the IPL which is more likely to have as much red-tape as the Board itself.

The BCCI has had its own ways of operating. The IPL, under Modi, looked an independent entity, even though it was working under the umbrella of the BCCI. The situation has become different now and the IPL by the look of things would be governed at the whims of the influential office-bearers of the Board.

The one decision which has caused them to lose Gavaskar and now Pataudi is the recent BCCI decision that the council members would not be paid henceforth. Gavaskar was first to refuse a post on the IPL's governing council with Pataudi following suit just a few days later. 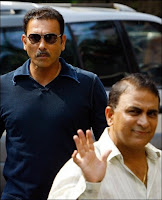 "I have written a letter to the BCCI which states that I do not wish to continue with the governing council. Earlier I was on a contract with the IPL, but the new changes are unacceptable for me. So, I have decided to move on," Pataudi was quoted as saying.

Gavaskar had immmediately turned down the BCCI's offer to be part of the governing council clearly stating that the IPL was a commercial enterprise and those working for it should be remunerated.

Pataudi and Gavaskar have walked out. Let us when Shastri decides to part ways with the IPL or may be he’s not much concerned about the financial matters.
readmore »»