Well it’s an established fact that the selection committee gets all the flak when their team fails to deliver but they seldom get praised or even recognized when the boys picked by them succeed beyond expectations.

The chairman and the members of the selection committee are in the firing line for the slightest of mistakes but they are hardly mentioned when their tactical moves pay rich dividends. 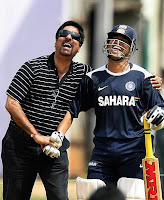 India’s national selection committee, headed by Kris Srikkanth, deserve to be complimented for have reposed confidence in Virat Kohli who made them proud by a match-winning century in the second One-day International against Australia in Visakhapatnam.

Srikkanth, who was a rare attacking batsman in the Indian line-up of the 1980s, described the victory as a confidence-booster ahead of the World Cup. India's highest successful chase against Australia in the absence of five first-choice players, Sachin Tendulkar, Zaheer Khan, Virender Sehwag, Gautam Gambhir and Harbhajan Singh, certainly gladdened the hearts of the selectors.

"It was an important win in the context of the World Cup because it creates confidence in the team. When you win against the number one one-day team in the world chasing a record total, it is all the more satisfying,” he remarked in an interview.

“The way we approached the game was fantastic. The good sign is that the youngsters are putting up their hands and taking up responsibility. It has proved that we have strong bench strength. It's always heartening to see youngsters winning matches for you. It is a good sign for any country," Srikkanth said.

“We have held meetings with the captain, coach, team management and the BCCI. We know what they are doing with the board. We have drawn up a beautiful plan in coordination with all sides concerned. We're on track," he reckoned.

Kohli, in particularly, batted exceptionally well to guide India to a resounding five-wicket victory with plenty of deliveries remaining.

“Honestly I was struggling to get runs. I had not scored in last six-seven matches. I was under pressure. I was not hitting in the gaps. It was very satisfying and it gives you a lot of confidence when you score chasing under pressure. I will not say my place is cemented. I have to keep performing well in few more chases,” Kohli conceded.

“You try to learn from the mistakes. You tend to fail sometimes. This is part and parcel of the game. You do the basics right and train hard, it pays back. I didn't perform well in last two series. I could not convert my scores into big knocks. There was a struggle for a place," the youngster felt.

Well Kohli has to keep performing in order to stay in the team. With so much competition for the batting slots he needs to score prolifically in whatever opportunities that come his way. He also has to prove his worth on the livelier pitches that greet the Indians away from the comfort of home.
readmore »»

It didn’t look like a true Australia-India game with both the countries packing their sides with an eye on the future rather on present. I don’t agree to the theory of both the nations having fielded a second eleven with the World Cup 2011, to be played in the sub-continent, in just a few months time.

The Indians have had this habit of obliging the visitors by not picking their strongest available side but the Australians have not been known for giving away caps cheaply. Therefore I was little surprised when they chose to enter the second ODI in Visakhapatnam with three inexperienced fast bowlers.

That seemed one of the reasons why the Indians got away with it this time round. Otherwise their young sides have often fared miserably with the disaster in Zimbabwe having taken place just a few months ago.

The Aussies proved too fragile themselves to contain the flamboyant duo of Virat Kohli and Suresh Raina while defending a total of 289. Stand-in captain Michael Clarke didn’t have the ammunition to come good on the flattest of tracks.

I was under the impression that the match had gone Australia’s way once they had plundered 84 runs in the last five overs of the innings. Cameroon White continued to be India’s nemesis and the experienced Clarke had no problems in milking the bowling.

Australia, having been jolted at the start of the innings by the seasoned left-arm quickie, Ashish Nehra, seemed to have done a great job by setting target of 290 in the end because at no point one foresaw them crossing the barrier of 250.

As we have become accustomed to watching over the years the Indian bowlers were taken for far too many runs in the final overs after having exercised control in the earlier part of the innings.

But there was an unusual story when India began the chase. Having depended heavily on the tried and trusted trio of Virender Sehwag, Sachin Tendulkar and Gautam Gambhir for kickstarting their innings they had three new faces with two of them, Murali Vijay and Shikar Dawan, failing not unexpectedly.

The third one, Kohli, turned it around with the knock of his life yet. His magnificent century lifted the home side and his productive partnerships with Yuvraj Singh and Raina settled the issue decisively.

It was one of the rare occasions when the youngsters had done it on their own for the home side who were prone to crashing in the absence of their star performers. Kohli proved many critics wrong with his technique and temperament.

There was not much element of surprise in the half-century of Yuvraj, having had to struggle for form and fitness for the past many months, but the knock of Kohli was something of a sensation.

Raina’s onslaught took the pressure off the limping Kohli, who celebrated his ton with a series of boundaries to seal the fate of the game. Ideally he would have liked to stay until the end but he was caught in the deep once more while attempting to clear the fence. We have seen him so many times getting dismissed in such a manner.
readmore »»