The 12th edition of the Sindh Games concluded with a colourful ceremony at the Shaheed Benazir Bhutto Sports Complex in Larkana on May 31 with the Chief Minister, Syed Qaim Ali Shah declaring the Games closed. 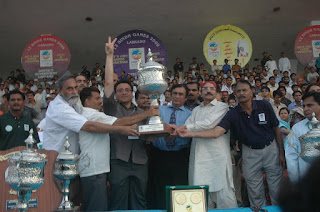 He paid rich tributes to the Provincial Sports Minister, Dr Syed Mohammad Ali Shah, to have dared holding the Games in the month of May, that’s generally considered hot from the sports point of view.

“We have known that the outdoor sports events in our country are staged in the season of winter or spring. But Dr Shah deserves credit to have given us the concept that the Games could also be held successfully in summer. The success of the 12th Sindh Games proved the point that every season is suited to sports if the events are managed professionally,” he observed.

The Chief Minister, while congratulating Karachi Region for clinching the trophy once more, urged the athletes of the other four regions to continue working hard for improving their performance in the future events.

He presented the winners trophy to Dr Frahan Essa Abdullah, chef de mission of the Karachi Region who was then carried on shoulders by the elated members of the victorious contingent.
Syed Qaim Ali Shah announced that the next edition of the Sindh Games will be staged in Karachi. He announced a grant of Rupees five million for the sports department for holding the 12th Sindh Games in a splendid manner.

Speaking on the occasion, Dr Shah observed that his mission was to spread the flame of sports in every nook and corner of the province and he needed the support of the provincial government in fulfilling his ambition. 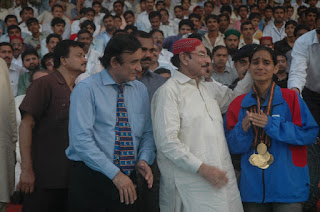 “I was advised by certain quarters to postpone the 12th Sindh Games or move it to any other venue in view of the weather conditions here. But it was my commitment to the people of Larkana to hold the Games here and we were able to organize it successfully despite all odds being stacked against us,” he said.

Dr Shah believed that the interior regions of the province deserved greater attention as they lacked the infrastructure facilities that didn’t allow their athletes to progress beyond a certain level.

The Provincial Minister for Local Government, Agha Siraj Durrani, who himself holds a black belt in karate, was highly appreciative of the efforts of Dr Shah and his team for having braved the hot weather and organized the Sindh Games so successfully in Larkana.

Ahmed Ali Rajput, Secretary, Sindh Olympic Association (SOA), in his speech, highlighted the various challenges that had to be met in holding the Games.

The welcome address was delivered by Shoaib Ahmed Siddiqui, Secretary Sports and Youth Affairs, Government of Sindh, in which he acknowledged the support of the concerned quarters in accomplishing the task of holding the Sindh Games. 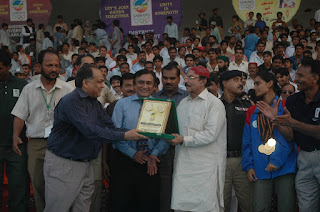 “According to the directives of the government we are working tirelessly to develop sports culture in the province. It’s our desire to engage the youth in healthy activities with sports being on top in the list of our priorities,” Shoaib Siddiqui said.