South Africa on a mission to tame Aussies 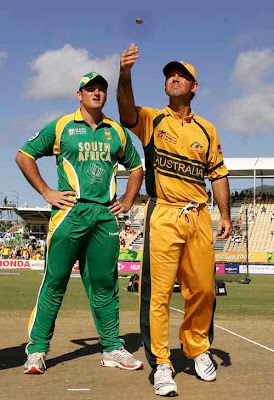 The upcoming three-Test series between Australia and South Africa is a mouth-watering prospect for the cricket enthusiasts. Being played in the festive season of Christmas and New Year it should generate tremendous interest Down Under and beyond.

South Africa are running high on confidence and they have every reason to belief that they have the guns to silence the Australian juggernauts who have been ruling the world for a very long time now.

The contest between the top two ranked sides of the world at present will be watched with great interest in every nook and corner of the globe. The only not so pleasant aspect of the series is that it is limited to just three Tests.

With the game’s administrators eager to sandwich more limited overs games than ever before in pursuit of quick bucks, the Test cricket is obviously the sufferer. The number of Tests is being reduced and it’s quite disappointing to find a series of just two Test matches getting wider acceptance.

What the cricket chiefs so conveniently ignore is the fact that in some cases the Test matches can create greater interest and hence bring in more revenue that is the bottom line these days.

What a pity that the Test series between the top two sides of the planet will be limited to only three Tests. It can still produce fireworks, excitement, tension and drama but it may not match the grace and dignity of a full five-Test series.

The worst part of a three-Test series is that the team drawing the first blood gets huge advantage and conversely the loser of the opening game has limited opportunity to bounce back in the series. That’s why very rarely the teams having conceded the first Test have gone on to the clinch a three-match series.

Unlike the past, it could be the Australians at the receiving end this time round. The first Test is to be played at Perth where the pitch is known to have extra bounce and zip. With the presence of the fast bowlers like Dale Steyn, Makhaya Ntini and Morne Morkel in their ranks, South Africa have the edge over the hosts in the pace bowling department and they stand a very good chance of going one-up in the series.

I agree with the South African skipper Graeme Smith that his side has the best chance of winning the series in Australia, a feat yet not accomplished.

Besides having a lethal pace attack, capable of destroying any batting attack, South Africa have an established opening pair and two of the world’s best all-rounders in Jacques Kallis and Mark Boucher.

The Australian pace trio of Brett Lee, Mitchell Johnson and Stuart Clark could have their work cut out against the experienced South African batters who are also quite used to getting runs on bouncy strips. With no Shane Warne to worry them, the South African batsmen will not mind slow or even spinning wickets either.

Similarly the likes of Mathew Hayden, Ricky Ponting, Michael Hussey, Michael Clarke and Andrew Symonds, who have scored prolifically in the recent past, may find life much tougher in the middle against South Africa’s spirited pace attack.