The Dreamworld Resort & Golf Club, located on the outskirts of Karachi in the vicinity of the Northern Bypass, remains a cherished destination for thousands of its members and many more who come to know about it from different sources. 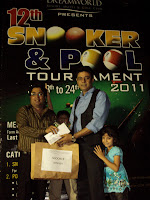 The resort offers a lot of recreational facilities to prompt the members to visit it on a regular basis and as usual there’s greater buzz and activity during the months of June of July when the majority of the educational institutions of the metropolis is closed and the families are looking for avenues to keep their kids and young children entertained.

The Dreamworld Cue Sports Championships were launched more than a decade ago during the summer months. They have been attracting good crowds since inception and it remains one of the showpiece events in their calendar. More people have come to know about it because of its extensive media coverage during the last few years. 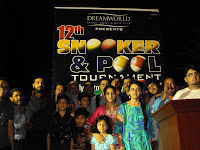 The finals of the 12th Dreamworld Cue Sports Championships 2011 were held on July 24 and not surprisingly there was excitement in the air and the participants as well as their supporters were enthusiastic around the Billiards Parlour.
Despite the uncertain law and order situation of the city during this period the participation was to the satisfaction of the organizers and there were not too many walkovers in the initial stages.
In fact the city situation was far from normal when the 12th Dreamworld Cue Sports Festival 2011 concluded with the prize distribution ceremony soon after the conclusion of the finals. The environment at the resort remained electric but obviously returning to homes quickly was already at the back of their minds when the function commenced. 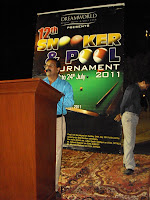 The popular figure of Shahid Nazir Minhas, one of the top ranked cueists of the country in the recent past, retained his snooker title successfully but was dethroned in the Pool masters event.

The tall and strongly built Shahid, who was active in the national circuit until a few years ago, continued to dominate the snooker tournament while Umar Saleem proved his mettle by claiming the Pool masters title.
Shahid retained the snooker trophy by whipping Rashid Habib 4-1 in the final with the frame scores of 68-60, 56043, 27-50, 84-25, 83-4. In the semifinals Shahid had blanked Ahsan Ahmed in straight frames with the scores of 68-31, 79-42, 80-21 while Rashid meted out similar treatment to Mohammad Zohaib with the scores being 41-30, 63-23, 63-38.

In the Pool masters semifinal defending champion Shahid was stunned by Umar Ahmed 2-5. Umar Saleem, who had prevailed over Rashid Habib 5-3 in the other semifinal, surprised Umar Ahmed in the final 5-3. 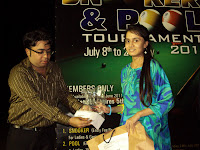 Fahim Iqbal won the Pool Amateurs title by whipping Hasan Aslam 3-1 in the final. In the semifinals Fahim had overpowered Ali Ahmed 4-2 while Hasan edged out Faizan Ahmed 4-3.

S G M Asim emerged triumphant in the Pool Seniors competition as he outclassed Aslam Qamar 4-2 in the final. In the semifinals Asim had outwitted Abdul Rauf 4-3 and Aslam defeated Saud Hasan by the same margin. Sadia clinched the Pool Ladies trophy by beating Sania 2-1 in the final.
readmore »»