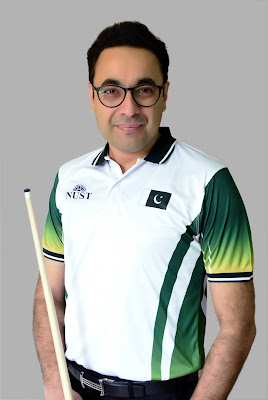 Cue sports around the world feature a variety of games, such as Snooker, 9-Ball Pool, 8-Ball Pool, Billiards and 3 Cushion Carom. While Pakistan’s cueists have regularly participated in snooker events organised by the Asian Confederation of Billiard Sports (ACBS) and the International Billiards and Snooker Federation (IBSF) the country’s appearance in other cue sports has remained negligible.
Pakistan boasts a number of titles in amateur snooker, both at the global and continental level. However, while enjoying an equal or even greater status in the world, 9-Ball is a rarity in the country.
The Islamabad-based Shahram Changezi is currently the only cueist from Pakistan pursuing 8-Ball Pool as well as 9-Ball Pool along with snooker. He already has snooker medals and honours under his belt. Besides being the national ranking champion 2007 and 2008, he secured bronze medals in the 2010 Asian Games Snooker Team Event (China), the 2015 Asian Team Snooker Championship (Iran) and the 2015 World Team Snooker Championship (Pakistan).
Shahram has also been making arrangements in his personal capacity to participate in 8-Ball Pool and 9-Ball Pool international events. His prominent performances included finishing runner-up in the 2008 All Arab 9 Ball Pool Championship (Kuwait) and being a quarter-finalist in the 2018 US Open Chinese 8 Ball Pool Championship.
The US Open Championship is the biggest event in 9-Ball Pool in the world. The event will take place in Harrah’s Resort, Atlantic City, USA, from September 13 to 18. As many as 256 players take part in this prestigious event, which, for the first time, will feature a Pakistani player. Beside all the prominent Pool players of the world, world professional snooker champion, Judd Trump, has also confirmed his entry and will make his 9 Ball Pool debut in this event.
Pakistan’s lone participant in the US Open Championship, Shahram Changezi, is a full-time employee at National University of Sciences and Technology (NUST) in Islamabad, where he works as the Assistant Director Sports. The institution has consistently supported Shahram in his national and international participation.
“The amount of support and respect I have received from NUST is extraordinary. Although primarily an academic institution, it offers full support to any student or staff participating in sports at national and international levels. Once again, NUST has stepped up to support me for my US Open 9 Ball Championship 2021 endeavour, and I am deeply grateful to them,” the ace cueist acknowledged.
“It is going to be an invigorating experience to compete among the world’s best 256 players. Personally, it is a matter of pride and honour for me to see my name as the first Pakistani cueist to take part in the US Open 9 Ball Championship. I hope my participation will create a stir in the cue sports community in Pakistan and will be a source of increased interest in 9 Ball Pool in the country,” he added.
“I have been practicing in a local Islamabad club (Breakers Snooker F-11), where they have an international standard 9 Ball Pool table. On my request, they immediately recovered the cloth and changed the balls to facilitate me. I am practicing as many hours as possible on a daily basis and I will try to give my best in my maiden US Open 9 Ball Championship,” he concluded.
readmore »»