The students of the Karachi University outsmarted their opponents in the Greenwich University Chess Tournament, organized by the Mind Sports Association of Pakistan (MSAP), in Karachi on April 19. 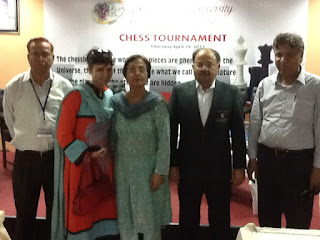 The one-day chess tournament, contested by some of the leading high schools and universities of the metropolis, was staged at the Greenwich University’s main campus located in the Defence Housing Authority. The event was held as a part of the university’s silver jubilee celebrations.

The Karachi University champion, Awwad Mirza, emerged triumphant in the competition by accumulating 4.5 points while Israr-ul-Haq, from the same institution, ended runner-up with four points and Syed Samad of Beacon House stood third by collecting same number of points.

The fourth position was grabbed by Syed Uzair Rashid, also from the KU, with 3.5 points while Muneeb-ul-Hasan of the NED University and Mughees Akhtar Hussain of the Islamia College finished fifth and sixth, respectively.

Sohaib Khalid secured the best position, eighth overall, from the lot of the participants fielded by Greenwich University. Amais Qureshi, Arish Hussain and Kazim Hamdani also registered a couple of victories each. 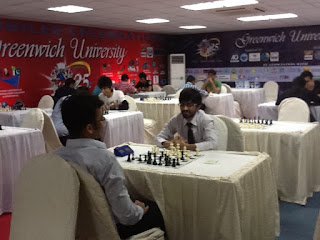 Tariq Rasheed Khan, Director, MSAP, who was the chief guest in the presentation ceremony, held soon after the conclusion of the matches, distributed the shields among the top performers while Prof ZA Saif, Dr Wasimuddin Khan and Prof Farhat Saleem gave away a few consolation prizes.

International Master Shahzad Mirza, who is also the Secretary General of the Pakistan Chess Players Association (PCPA), conducted the tournament which was spread over five rounds on Swiss Movement System.

The tournament was quite nicely organized and the hall of the Greenwich University, where the event was being held, presented a festive look. The enthusiasm of the participating students gladdened the hearts of the organizers as well as the hosts.
readmore »»