From Ehsan Qureshi in Sharjah 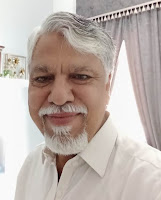 Babar Azam’s Team Pakistan will be aiming to extend their winning streak in the league rounds of ICC T20 World Cup as they prepare to take on Scotland in Sharjah on November 7. It has been the happy hunting ground for the green shirts over the years and they appear poised to end their league campaign with another powerful victory.
Less than a couple of weeks ago, Pakistan had outsmarted New Zealand at the Sharjah Cricket Ground with Asif Ali’s three huge sixes and Shoaib Malik's brilliance rotation of strike.
Victories in their previous four games over the quartet of India, New Zealand, Afghanistan and Namibia, have built a big reputation for Pakistan and they are being tipped to lift the trophy. They only need to sustain the momentum in the knockout games to capture the crown which looks at a striking distance now. 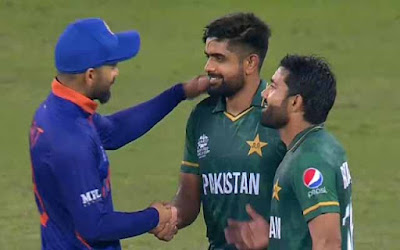 Pakistan will be returning to arena after a gap of five days with three-day rest for the game. The big question being asked was whether Pakistan will field allow a couple new players as they have already assured a place in the semifinals.
It remains to be seen if Haider Ali, Usman Qadir or Muhammad Nawaz will be tried against Scotland or will they continue to be benched.
Although there’s a tradition of sorts in Pakistan cricket of not altering the winning combination but trying out new boys could be helpful in testing their skills ahead of the semifinals.
Pakistan’s coaching staff is expected to work out plan for improving performance in their six overs power play. This is one vital area which sets impetus to boost good total and the think-thank must find ways to deal with it. 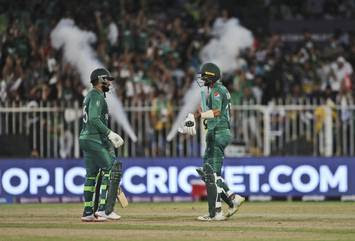 It may be recalled that Pakistan had struggled initially against Namibia scoring only 29 runs in six overs and there were as many as 14 dot balls during the first three overs.
Batting supremo Babar and Muhammad Rizwan will continue to hold the key to provide exhilarating start when only two fielders out of circles. With Babar and Rizwan expected to extend their brilliance with the bat, Pakistan will be looking forward to Shaheen Shah Afridi, Hasan Ali, Haris Rauf, Imad Wasim and Shadab Khan at their best in the upcoming crunch games.
I feel that leg spin and googly bowler Usman Qadir could be tried out in the game against Scotland who don’t seem not very comfortable in combating such variety of bowling as was witnessed in their struggles in tackling the Indian spinners the other night in Dubai.
Kyle Coetzer's Scotland, after offering New Zealand a tough fight, were actually blown away by India. They were bowled out by the rampaging trio of Ravindra Jadeja, Muhammad Shani and Jasprit Bumrah for only 85. The Scots, however, cannot be taken lightly as George Munsey, Richie Berrington, Michael Leask and Mathew Cross are dangerous batters.
readmore »»