There was nothing unfamiliar with the final result. Considering the wide gap between the two sides there was hardly an element of surprise in watching Australia overpower Pakistan by 150 runs in the first Test at Lord’s with over a day to spare. 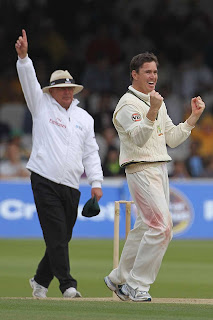 The match was won and lost on the basis of first innings and there was not much Pakistan could have done to prevent another defeat at the hands of their fancied rivals who possessed far greater depth and experience in the batting department.

It went to the credit of the Pakistan bowlers, however, to have tested the mighty Australian middle-order and cut them to size in conditions which were not ideal for free flowing strokes.

Australia, having been floored in both the Twenty20 Internationals prior to the start of the two-Test series, might have desired to win the first Test a bit more convincingly but in the end they must have been satisfied with what they really achieved even after not being in total control.

Simon Katich, who is not as flamboyant as Mathew Hayden or as secured as Justin Langer, rose to the occasion in both the outings to save his team from embarrassment. It’s not often that the trio of Ricky Ponting, Michael Clarke and Michael Hussey fails to dominate the bowling but it was one of those games where they were unable to dictate terms.

Australia collapsed in both their innings despite the heroics of Katich. They were unable to build a score they would have liked and it was left to their bowlers to expose the inexperienced Pakistan batting line-up which they did.

How often does one see Australia lose their way after being in the driving seat? They were in a commanding position after the 120-run third wicket stand between Katich and Clarke yet they struggled to post a total of 250.

Australia made amends by bowling Pakistan out for less than 150 that gave them a more than handy lead of 100 in what was more likely to be a low scoring affair.

The start to the Australian second innings was more assured than the first one but another middle-order collapse from a position of strength reflected the vulnerability of their top-class batsmen. It was really amazing to see Ponting, Clarke and Hussey perish so quickly one after another on the second evening. 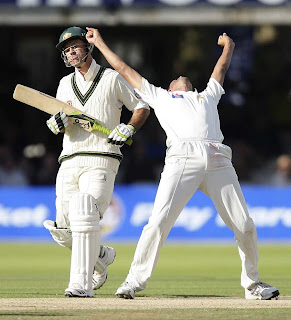 Katich turned out to be unlikely bowling hero and even unlikelier bowlers stole the limelight. Shane Watson swung the ball appreciably on the second afternoon to rip through Pakistan’s batting and was rewarded with a five-wicket haul.

Then just as the sun came out and the batting conditions eased out Pakistan’s batsmen grabbed the opportunity of helping themselves for some runs which didn’t threaten the Aussies but the game was stretched to the fourth day.

Pakistan could have seriously considered themselves in a position to win the game even while chasing a fourth innings target of 440 if the opponents were anyone other than Australia.

The Pakistan batsmen took the off-spin of Marcus North for granted and obliged him with a haul of six wickets. Their act was not too dissimilar to the ones in Australia a few months ago when they had gone after Nathan Hauritz to gift him five-for a couple of times.
readmore »»