Shahid Anwar’s century powered Golden Eagles into the Punjab regional semifinals of the 16th National Seniors Cup Cricket Tournament 2014 as they defeated Gujranwala Blues by four wickets in the quarter-finals held at the Aligarh Ground. 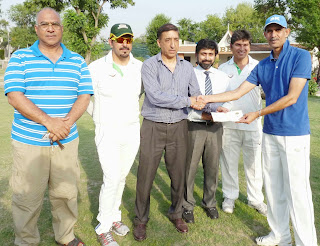 With the qualification of Golden Eagles the regional semifinal line-up was completed as the trio of Chaudhary Sports, Aftab Qarshi and SPM Stags had already booked a place in the last four.

Shahid Anwar’s knock of 101 allowed Golden Eagles to reach the target with an over to spare as they finished with 249 for six in 29 overs. Nadeem Farooqi (58), Mohammad Shahbaz (34) and Naseer Ahmad (34) also contributed substantially in the chase to overcome the threatening quartet of Tariq Mehmood (2-39), Abdul Jabbar (2-57), Naeem Khalid (1-25) and Aurangzaib (1-37).

A record number of 108 teams from 58 cities had entered the 16th National Seniors Cup, having commenced in March. The participants included 35 city outfits from Punjab, 13 from Khyber Pakhtunkhwa, eight from Sindh, three from Islamabad and one from FATA.

The southern region competition has already been completed and its winners, Omar Associates, will take on the champions of the northern region in the national final to be played in Lahore later this month. The event is being jointly sponsored by Arif Habib Corporation Limited and Omar Associates (Pvt) Limited.
readmore »»