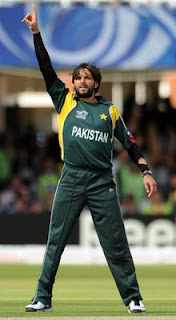 Pakistan's flamboyant all-rounder Shahid Khan Afridi has felt deeply hurt and disappointed the way the smearing campaign was launched against him following the ball biting incident during the fifth and final One-day International against Australia at Perth on January 31.

"I did commit a blunder in frustration by biting the ball and subsequently faced the punishment for the offence," he told APP Sports Correspondent Ehsan
Qureshi in an exclusive interview in Karachi on February 22 upon his return from Dubai
after the just concluded two-match Twenty20 International series against England.

"Our team was on a losing streak and in the heat of the moment I did a wrong thing in
in the state of frustration," he regretted in what probably was his first media interview in Pakistan after that controversial incident.

"In the past so many extraordinarily controversial incidents had taken place on and off the field in cricket but they had gone unnoticed because the media was not so strong in that era," he pointed out.

"I am really stunned at the manner in which the odd mistake of mine has been so much highlighted It’s very strange indeed to find the matter being blown out of proportions,” Shahid Afridi observed.

"I have already served the two-match ban imposed by the ICC and could face a bigger sentence if I do commit any other mistake,” he said.

"I once again apologize to the whole nation and my followers across
the globe for the wrong I committed. I have served the country to the best of my abilities and will continue to do so as long as required by PCB and the selectors," he
added.

"Look at the golf superstar Tiger Woods. He had made a mistake and he apologized to his followers and chapter may shortly be closed. That’s all. The life has to go on,” the dashing all-rounder opined.

Well Shahid Afridi is a smart guy, having lived his life in Karachi. He has been one of the popular cricketers of the country despite his inconsistent record at the international level. A crowd puller in every part of the country he has had massive following abroad too.

He, however, has had his own share of problems. He’s not new to controversies. He was in the news for the wrong reasons when he was found guilty of attempting to damage a cricket pitch a few years ago. 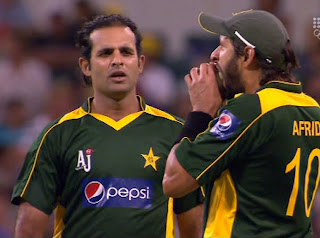 Having been in and out of the team, he is also accused of being one of the leading characters in the plot to oust skipper Younis Khan at a time when he should have been his right hand man being the vice-captain.

Some observers feel that instead of helping out Younis Khan, the dashing all-rounder aligned with the intriguers in the team after being assured that he would be captaining the national team in the World Cup 2011.

Did he commit the blunder of his lifetime by deserting Younis Khan and joining hands with the forces that eventually succeeded in their designs or was it another big ‘six’ by the master blaster only time will tell. readmore »» 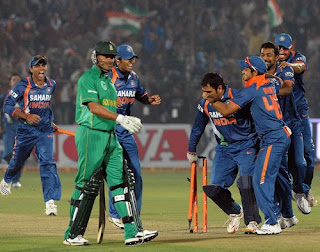 Any other team would have been considered victorious if they dismissed Jacques Kallis at that stage when the asking rate was in the double digits and two tail-enders were crease for the last seven or eight overs. Not India.

India for ages have had this tendency of losing their way in the end after being in the driving seat for the better part of the match. That’s why while the others thought it was all over for South Africa I considered ‘Game on’ even after the dismissal of Kallis and didn’t miss a single delivery.

People around me wondered how I was anticipating a close contest when it was appearing a one-sided affair for all practical purposes. My reply was simple. You never know with India. Trust me I would have given it up too if South Africa’s opponents were Bangladesh or Zimbabwe.

The record books will show that India emerged triumphant in the first One-day International against South Africa at Jaipur. What these score sheets might not be able to tell how much frustration and humiliation the hosts had to endure after having dominated the day.

India should have been well and truly home after removing Kallis, who had earlier been missed by skipper Mahendra Singh Dhoni of all people. The lapse didn’t prove costly but Yousuf Pathan was denied a wicket he so richly deserved after bowling an outstanding spell with the dew factor taking its toll.

But the tail-enders Wayne Parnell and Dale Steyn came up with their career-best knocks. Not only did they score far too many but they also got them very quickly against an attack whose discipline had made life miserable even for the top-order.

Parnell and Steyn had fun with the Indian bowlers and the crowd that had been shouting all day was brought to silence in a matter of few overs. The festive mood of the spectators turned tense and there was more of disbelief and amusement at what really was going on in the field of play.

It was complete chaos for India. The bowlers started getting punished by the tail-enders. Initially it was being believed that a few hits here and there would have little bearing on the outcome but Dhoni was alive to the situation and he was not taking any chances. He immediately took off part-timer Suresh Raina after being clobbered for two straight sixes in three balls. 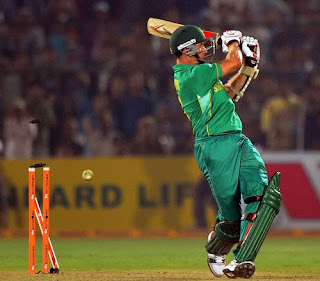 Ashish Nehra is probably India’s best bowler in the death overs after Zaheer Khan, who was not playing due to injury. Nehra did stem the flow of runs by bowling a superb penultimate over but what followed in his final over was nothing short of a nightmare for the tall left-arm quickie.

Dhoni’s problems were compounded because of the lack of control over line and length on part of Shantikumaran Sreesanth, the replacement of Zaheer Khan. Sreesanth did take two key wickets but he was far too expensive to be risked for the final over.

Dhoni made the right decision to entrust Praveen Kumar the job of sending the last over from which South Africa needed only 10 to complete the unlikeliest of victories. Kumar somehow kept his cool and didn’t let his team down. The dramatic over, that also included an off-side wide, yielded eight runs that ensured India at least won the match. readmore »»