Posted by Editor at 3:54 PM .
0 comments
Labels: Indian Cricket, Micromax Cup 2010, Sri Lankan Cricket
By Syed Khalid Mahmood
Sri Lanka’s task of winning the final of the Micromax Cup 2010 was made easier by the lackluster performance by the Indian batsmen once more. With the youngsters not prepared to meet the challenge and Virender Sehwag unable to translate the promising start into something substantial there was only one team that looked focused on clinching the trophy in Dambulla on August 28.
India had reinforced their batting by axing bowling all-rounder Ravindra Jadeja and bringing in Rohit Sharma. But they were unable to come good even on the easiest batting track witnessed during the competition as the ball had dominated the bat in the earlier games. 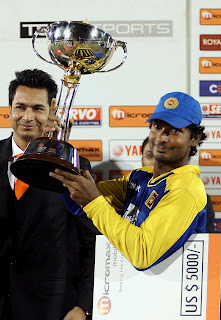 While the Sri Lankans were clinical in approach, as they normally do, the intensity was lacking in the Indian camp. The stage was set for the young guns to make amends for their past failures in the tournament but neither of them displayed the determination expected of them after having an extended run in the international arena.
Only Dinesh Karthik was unlucky to have been given out when the ball was nowhere close to his bat when he attempted to leg-glance Lasith Malinga in the opening over of the innings. On any other day that could have easily run for four leg byes but this time the ball landed in the gloves of the diving Sri Lankan captain, Kumar Sangakkara, whose vociferous appeal prompted umpire Asad Rauf to raise his finger.
Sehwag had already played a couple of gorgeous cover drives yielding boundaries earlier in the over and all Karthik was needed to stay there and rotate the strike which he couldn’t.
Much if not all depended on Sehwag to carry the fight to the Sri Lankans while chasing the target of 300. He had started off in a spectacular fashion and all his boundaries were coming from the meat of the bat. He, however, ran himself out in bizarre circumstances much to the delight of the home crowd.
Yuvraj Singh and Virat Kohli looked in the process of building a prosperous partnership but it was cut short against the run of play when the former got the faintest of edges while executing an unorthodox shot. Kohli didn’t last much longer either although his stay in the middle was a bit longer than earlier games. 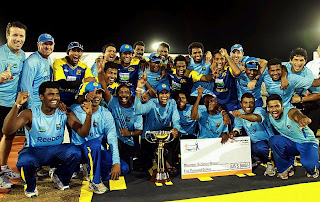 Suresh Raina and Rohit Sharma continued to disappoint leaving the responsibility on the shoulders of skipper Mahendra Singh Dhoni whose lone vigil kept the match alive at least theoretically till the end. He was last man to be dismissed for 67 as India lost the game by 74 runs.
"If you are able to build partnerships is the only way you can chase something close to 300. Most of the batsmen got the start that was needed we wanted at least a couple of batsmen to score big. Even if they had scored close to 60-70 odd runs, it would have been a close game if we had converted our starts," Dhoni said at the end of the match.
“It was the best track given to the players in this series I felt it played quite neutral under the lights also. The base of the wicket was really hard and, though there was grass on top of it, it played the same throughout the game," he added.
readmore »»