Another Ashes Test turns out to be cliff-hanger


The first Investec Test between England and Australia at Trent Bridge had nearly all the ingredients of another epic Ashes battle which was sold out for all five days. The 2013 series could have started in a more appropriate manner. 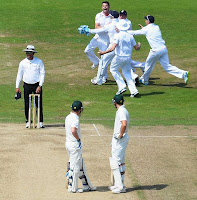 The absorbing contest on all five days proved the point once more that Test cricket in alive and kicking. No matter how much greater money could be earned in lesser time by staging limited overs games or tournaments the fact remains that a high profile Test series has his own significance.

The Trent Bridge Test which England have won by 14 runs in the end remained a fascinating game all along. It was the faintest of tickle, not even spotted by the umpire, which finally sealed the fate of the match in the home side’s favour.

Australia, not England, could have emerged triumphant if no DRS was in place. It was the third umpire who made the ultimate decision to settle the issue after five days of intense drama. There was something special on all five days and the cricket enthusiasts could not have desired a closer Test match than this. Chasing an improbable 311 in the fourth innings of the game, Australia seemed to be out of the contest when their ninth wicket fell on the fifth and final morning with 80 still needed. Brad Haddin and James Pattinson counter-attacked with purpose and remained unseparated until lunch which was extended by half an hour as the last pair was in.

Haddin and Pattinson had brought Australia right back into the game with their steady partnership and there was every reason for Alastair Cook to feel worried even though it was just a matter of one more wicket. That wicket took long time coming.

Even James Anderson, whose inspired spell of fast bowling had brought England at the brink of victory, had lost steam against the stubborn last pair. Cook was running out of options and runs. He must have had an uneasy lunch. It was a matter of just a few more lusty blows and Australia would have been home.

They were only 15 runs away from the target when Haddin, well set on 71, seemed to have nicked Anderson. 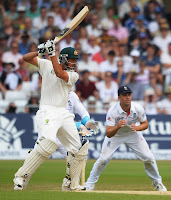 Aleem Dar, the on-field umpire, was unsure as the England fielders appealed for caught behind. Since he did not spot an inside edge about which only the wicketkeeper, Matt Prior, seemed convinced, the benefit was doubt was given to the batsman which was perfectly in the spirit of the game.

England, sensing it as their last opportunity, went for the review more in hope than anticipation and they had the decision reversed in their favour and the party began. But it brought to an end one of the most dramatic Test matches of the recent times.

Anderson's skill and stamina proved decisive in the end as he returned the match winning figures of 10 for 158 off 55.5 overs. He overshadowed the heroics of teenaged debutant Ashton Agar, who created a world record by scoring 98 while batting at number 11 in the first innings.
readmore »»