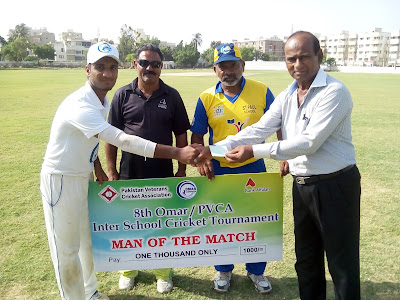 Batting first, after winning the toss at the Eastern Star Ground, Qamar-e-Bani Hashim School overcame a shaky start to post a mammoth total of 326 in 38.5 overs before bowling out Zeeshan Secondary School for only 89 in 17 overs.

Opener Mohammad Hussain led the carnage with 89 off 66 balls, cracking one a six and 12 fours, after three wickets had gone down for 29.

He added 155 for the fourth wicket with Mohammad Haider, who struck 11 boundaries in his 64 off 59 balls.

Kazim Hussain’s 50 off 47 balls sustained the momentum while the late flourish was provided by Ali Akbar’s 36 off 19 balls containing one six and five fours. The contribution of 49 extras also helped in boosting the Qamar-e-Bani Hashim School total.

The score could have been even higher without the wicket-taking acts of medium-pacers Waleed Khan (4-58) and Mohammad Faizan (2-63) while off-spinner Mohammad Muneeb (2-39) was also the most economical bowler of the innings.

Set to score 327 in 40 overs, Zeeshan Secondary School crashed to 89 all out after being 57 for two. Opener Mohammad Ashar (23 off 24 balls) and Mohammad Bilal (14 off 18 balls) were the only batsmen to enter double figures as the innings was wrecked by the off-spin of Mohammad Hussain (4-21) who was assisted by off-spinner Haider Zaidi (2-11) and medium-pacer Rehan Abbas (2-14).

Mohammad Hussain of Qamar-e-Bani Hashim School was the unanimous choice for Man of the Match award for his superb all-round effort. In the day’s other game Qadri Model School, batting first after calling correctly, was bowled out for 176 in 36.4 overs at the KCCA Stadium but they defended it successfully by routing St Paul English School for 132 in 35.1 overs.

Opener S M Shaheer (49 off 58 balls) provided a flying start to Qadri Model School but they lost their way in the middle overs due to the fine bowling from the spin trio of Izhan Ahmed (4-30), Suhain Sameer (2-30) and Mustafa Siddiqui (2-37).

Chasing a target of 177 in 40 overs, St Paul English School was put in the driving seat by opener Abdullah (47 off 87 balls) but he didn’t receive support from fellow students who were clueless against the spinners.

They collapsed from 91 for two to 130 all out to lose the game after controlling it for a while. Leg-spinner Saad Bin Yousuf (4-27) was the most successful of the Qadri Model School bowlers while off-spinner Syed Yawar Imam who turned the game around with his spell of three for 14 off 6.4 overs was adjudicated as Man of the Match.
readmore »»