Tendulkar’s yet another super failure

There’s indeed something special about a man named Sachin Ramesh Tendulkar. When he’s good he’s better than the best. Conversely when he’s not good he fares worse than the worst.

When he’s on song he appears to be the greatest-ever batsman but when he’s not in a mood to be among the runs he looks uglier than the traditional tail-enders who used to be there just for fun. 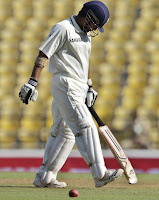 He has proved it on innumerable occasions that he’s second to none when it comes to taking on the greatest of bowlers. But the same man remains vulnerable to the friendliest of bowlers who are themselves scared of having a go at him.

Isn’t it strange that he’s equal to the task more often than not while coming to task with the champion bowlers and yet behaves like a novice when confronting the lesser mortals? This has been his story for a very long time now.

Statistically he’s the best batsman to be produced by his country. But how many matches has he won for India during an international career having crossed two decades now. He has scored in heaps but his performance in helping his team has not been as phenomenal.

Primarily because of his records, that are unlikely to be broken in the foreseeable future, he’s compared to the likes of the incomparable Don Bradman. I wonder if the Australian genius had so many failures as Tendulkar and that too against inconsequential bowling attacks.

Tendulkar has had this chronic problem of failing against the weaker opponents that do raise many questions just like he’s often found wanting when India need him to fire. The matter gets closed because of the human factor.

He’s no doubt a human being and it’s indeed next to impossible to score consistently over a long period of time. But what fails to satisfy many people is the bitter reality of his repeated failures against weak opponents with the just concluded home series against New Zealand being the latest example.

The form in which Tendulkar was in for the past many months, having blasted centuries after centuries at his sweet will it had seemed very likely that he would complete his half-century of centuries in the very first outing against the Black Caps, possessing a toothless bowling attack.

He was expected to do it in the first Test at Ahmedabad. Centuries by Virender Sehwag and Rahul Dravid had demoralized the New Zealanders on the opening day and the stage was set for Tendulkar to accomplish the feat without any fuss the following day.

The big crowd having gathered there in anticipation of the historic moment was disappointed when he got himself out against the run of play on the second morning. He got the opportunity to make up but he let it go again in the second innings. Then it was the turn of the holiday crowd at Hyderabad to watch in dismay yet another Tendulkar failure in the second Test.

Came the third and final Test and Tendulkar was in complete control before throwing it away once more. The whole series went by and he couldn’t score even a single century despite being in what people though was the form of his lifetime. 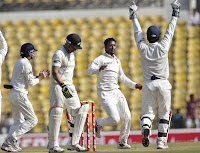