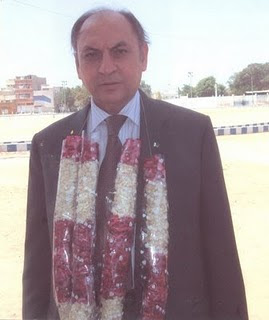 In recognition of his momentous services to the game of cricket, the Karachi City Cricket Association (KCCA) proudly declared Prof Ejaz Ahmed Farooqui, Chairman Zone II, as the Super Chairman.

Prof Siraj-ul-Islam Bokhari, Honorary Secretary, KCCA, minced no words in stating that Prof Ejaz Farooqui has turned out to be the standout chairman as far as the seven zones of the Association were concerned.

Speaking in the reception held in the honour of Prof Ejaz Farooqui on his recent election as the Vice President of the Arts Council of Pakistan, Prof Siraj Bokhari recognized the most significant contribution towards the cause of cricket at the grassroots level made by the KCCA Zone II during the past three years.

“It’s very gladdening to note that the KCCA Zone II has been the hub of cricket activities in the city eversince Prof Ejaz Farooqui was elected as their chairman. His outstanding leadership skills have brought about a distinct change and there have been more tournaments in their zone than anywhere else,” the KCCA Secretary noted.

The founder of Urdu cricket commentary and a former President of the KCCA, Munir Hussain, also paid glowing tributes to Prof Ejaz Farooqui, describing him as the man of the moment.

He acknowledged that the club cricket, having remained alive in Karachi over the years, has graduated to another level with the proactive approach of devoted personalities like Prof Ejaz Farooqui.

Munir Hussain backed Prof Ejaz Farooqui for the post of the Vice President of the KCCA urging its council to incorporate the necessary changes in their constitution to get him on board without wasting any more time.

The other speakers who showered Prof Ejaz Farooqui with praise in the reception held at the KDA Officers Club on January 12 were Mahboob Shah, a former international umpire who stood in the final of the 1987 World Cup, Senator Prof Saeed Siddiqui, Chairman, Sindh Board of Technical Education, and Mohammad Ahmed Shah, Honorary Secretary, Arts Council of Pakistan.

It was only three years ago when Prof Ejaz Farooqui had been elected as the Chairman of the Zone II of the KCCA in the elections held under the auspices of the Pakistan Cricket Board (PCB). 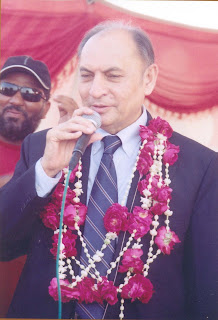 He has been chiefly responsible for bringing the Zone II to life during the last three years.

What he has done for the zone in particular and for the cause of cricket in general is truly exemplary. He has led the zone admirably and his great personal interest in promoting the game has brought about a revolution of sorts at the club level.

He had had a vision to carry out development work in every nook and corner of the zone. He has been concentrating for creating more facilities in Surjani Town and Khuda Ki Basti.

The good work carried out by the zone during the past three years has been yielding results and they continue to be motivated by their chairman who urges the need to work with greater zeal to accomplish more success.