The entire cricket world has become gloomy all of a sudden because of the shocking death of Dean Jones, the former Australian top-order batsman, while performing duties as commentator in the Indian Premier League (IPL) 2020.
Jones was as jolly and outgoing as ever when describing action only the previous night, with no hints of any discomfort or illness, but he collapsed in the lobby of the five-star hotel where he was staying on the morning of September 24.
Brett Lee, also a former Australian star, was reported to be very close to him as he watched in utter disbelief his fellow commentator suffer a cardiac arrest. He showed the presence of mind and tried his level best to revive Jones but his efforts could not yield the desired results.
The gloom spread all over the world because, Jones, popularly known as Deano, was a lovable character, adored from North to South and East to West. There are not many cricketers around who have enjoyed this kind of admiration globally. 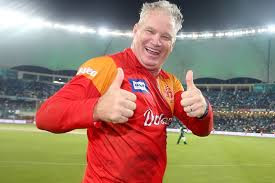 As far as my knowledge is concerned, he was the first top-order batsman of Australia to have adopted aggressive approach in batting from the moment he arrived at the crease.
Australia has been the home to many world-class batsmen, before and after him, but in my estimation Deano was a trend-setter of sorts.
He showed attacking instincts and loved to dominate the bowlers with unorthodox shots, which were not very common those days.
The likes of Adam Gilchrist and Mathew Hayden emerged in the following years to make Australia the number one team as they ruled the world for a long time. The foundation for attacking batsmanship in Australia was laid by none other than Deano, I think.
If my memory serves me right, it was Deano who introduced colorful glasses in the cricket field. The cricketers from all over the world then emulated him. He was a character in the truest sense of the word.
Upon hanging his boots, when he had still seemed good for many more years, he made his presence felt in the team of commentators with his distinct voice and witty remarks.
Then we also saw him excel in the role of a coach. He helped Islamabad United win the title of the Pakistan Super League (PSL). He was the head coach of Karachi Kings in the PSL 2020.
It’s hard to believe that such a proactive and energetic man has left this mortal world abruptly. The cricket world may never be the same without him and he will be missed.
readmore »»