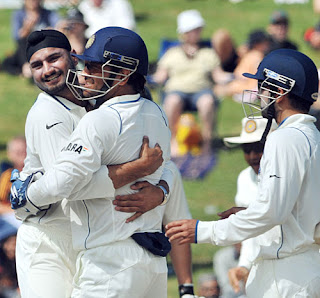 The Indian cricketers played to their potential in the first Test of the ongoing series in New Zealand and finally they were able to accomplish something their predecessors had somehow failed to do.

Yes it has taken India 33 more than years to defeat New Zealand in a Test match on their soil. It’s a generation gap. I was 12 years old, studying in Class VIII at Cadet College Petaro, when India had overpowered New Zealand by eight wickets in the first Test at the Eden Park, Auckland, in January 1976.

Now my eldest daughter, Javeria, having celebrated her 12th birthday just a couple of months ago, is preparing to move to Class VIII, when India has again beaten New Zealand in the first Test at the Seddon Park, Hamilton, in March 2009.

It’s not that India didn’t visit New Zealand often in the 33-year period. There were regular tours after the 1975-76 series but for some reason or the other India could not put their acts together to win a Test match there for over three decades.

Acting skipper Sunil Gavaskar and debutant left-hander Surinder Amarnath were India’s batting heroes in the Auckland Test of the 1975-76 in which their famed spin trio of Eripalli Prasanna, Bhagwat Chadrasekhar and Srinavas Ventakraghawan had bowled superbly to engineer the famous win.

They could not have even imagined that it would remain their only Test win in New Zealand for 33 as many as years. How could have they known that India would be returning empty handed from New Zealand even while having far too stronger outfits.

India toured New Zealand again in 1980-81 and looked set to start the Test series on a winning note when they routed the hosts for 100 in their second innings. With two days play to go all they needed was to get 253 on a pretty nice surface of the Basin Reserve in Wellington.

Having given a very impressive account of themselves in earlier series in Australia, the Indians, captained by Sunil Gavaskar, appeared the firm favourites to win the Wellington Test while chasing the modest target. But they made a heavy weather of it and crashed to a disappointing 190 all out to lose the game by 62 runs instead. With the home umpires refusing to raise their fingers, India could not square the series.

India was humbled again in the first Test on their next tour of New Zealand in 1989-90 under newly installed skipper Mohammad Azharduddin. All their efforts of leveling the series were foiled once again.

India failed to drive home the advantage in the only Test during their tour in 1993-94 while their first Test of the 1998-99 tour was abandoned without a ball being bowled. They were narrowly beaten in the second Test and the third and final game was drawn. 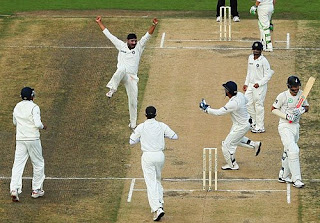 India’s tour to New Zealand in 2002-03 was so horrible from their point of view that the Board of Control for Cricket in India (BCCI) didn’t risk send their team again in 2006-07 on the eve of another World Cup. The Indians had their moments in both the Test matches but they couldn’t force the result in their favour on either them and for the first India they lost more one Test in a series in New Zealand.

Here is the opportunity to set the record straight. After having won the first Test so comprehensively, India should be aiming to close the series in the very next game. Although the history is not on their Indian side, the present lot has the depth and the character to rewrite it.
readmore »»