Former national snooker champion and Asian Games bronze medalist, Shahram Changezi, has set the ball rolling by developing a snooker lounge and academy in Islamabad, which was inaugurated recently. 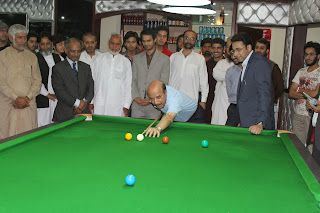 It was in the fitness of things that Brigadier Arif Siddiqui, who led the Pakistan Sports Board (PSB) with distinction for quite a few years, was invited to do the honours in the inauguration ceremony.

The former Director General of the PSB was the chief guest in the opening ceremony of the Shahram's Snooker Lounge, held with great fanfare in the presence of enthusiastic cueists and notables.

Shahram Changezi, himself one of the most accomplished cueists of the country, was showered with praise for having ventured into the project in partnership with Rashid Ali, an entrepreneur. 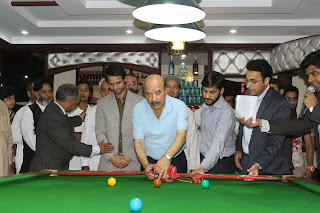 “Shahram and Rashid deserve appreciation for establishing a snooker academy in the federal capital. Others should take the cue from them and also play their part in promoting the game which has earned good name for the country,” Brigadier Arif Siddiqui remarked in his brief speech on the occasion.

“We will try to remove flaws from the techniques of the players and also provide free of cost training to school, college and university students and conduct tournaments for them,” Shahram Changezi, who has remained vocal in advocating for institutional and corporate support to the game of snooker, announced.

“We have launched this venue with the best possible facilities which will also serve as an academy. Our mission is to promote the game and produce best players from the region,” he observed. 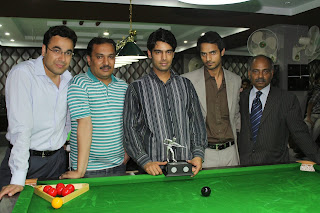 “Our future plans include organizing junior snooker tournaments and twin-city snooker tournaments. We will groom the cueists for participation in in the provincial and national events. We would urge the educational institutions to avail free training/introductory camps being offered for school and college students. We will also conduct free basic training for the cueists on weekends at the Shahram's Snooker Lounge,” the former national champion added.

Meanwhile a tournament was held to mark the inauguration of the venue which was won by Yasir Nadeem, who defeated Rashid Ali 3-1 in the final, to clinch the trophy and cash award of Rs 10,000, presented by Fahim Anwar Khan, Secretary, Islamabad Billiards & Snooker Association (IBSA).
readmore »»