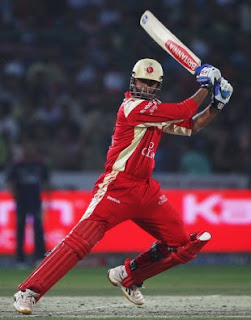 Royal Challengers Bangalore, inspired by brilliant half centuries from Rahul Dravid and Robin Uthappa, recorded an impressive seven-wicket victory over Kolkata Knight Riders in yet another crucial match of the Indian Premier League 2010 also known as IPL-3 at M Chinnaswamy Stadium on April 10.

The big crowd was entertained to some fabulous cricket and the outstanding performance of the local heroes was an icing on the cake for the thousands of fans who couldn’t have expected more weekend fun.

Bangalore were also indebted to their bowlers for having limited their opponents to 160 in 20 overs that allowed their champion batsmen to go about the chase in an unhurriedly manner. The victory lifted them to the second place in the points while Kolkata were left struggling among the last three.

Anil Kumble’s gamble of fielding first after winning the toss paid off and the master craftsman had the reasons to feel delighted with the outcome. His change bowlers stuck to their job and the established batsmen delivered at the right time to finish off things in a convincing manner.

Praveen Kumar and Dale Steyn were guilty of spraying the ball in conditions where they would have been better off pitching it up. Swing and movement was on offer for them but they made a mess and conceded far too many runs in the initial overs.

Left-handers, Sourav Ganguly and Chris Gayle, both of them known for taking the attack to the bowlers, enjoyed the width provided to them with as many as 61 runs coming in the Powerplay that was the highest achieved by Kolkata in the tournament.

Jacques Kallis was also punished for bowling short but Vinay Kumar pulled it back for Bangalore and his spell led a turnaround. He was not afraid to pitch the ball up to the batsmen while using the short ball sparingly, a tactic that was more likely to work in the prevailing conditions.

The fall of three wickets for two runs in the space of nine balls derailed Kolkata but Brendon McCullum revived them by clubbing Sridharan Sriram for 18 in an over.

It was the turn of captain Kumble to rise to the occasion and he bowled superbly to emerge as the most economical bowler of the day. Kolkata lost the plot in the final overs and their eventual total was unlikely to be adequate as it turned out. 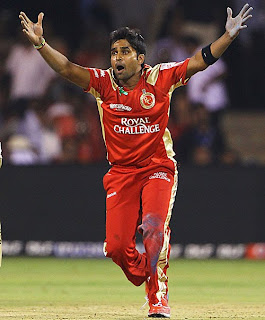 If Kumble had led by example in the field, the responsibility of guiding the team with the bat was taken by Dravid. Isn’t it quite extraordinary that both these stalwarts continue to deliver for so long?

Dravid, despite appearing in top form, didn’t have a big score in tournament yet with the likes of Kallis, Uthappa and Virat Kohli doing the bulk of the scoring for Bangalore.

He got the opportunity this time round and dominated the bowling in the usual style of his. He kept the scoreboard ticking over with a brilliant half century and the stage was set for Uthappa to explode and seal the victory in the company of Ross Taylor. readmore »»